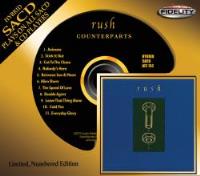 Progressive rock in the early 90s was not the place to make it and pay the bills. There were a few bands that were able to flow with the times and record relevant music regardless of what the public taste was at the time. Rush was one of those brilliant bands that have fans that saw them through the changes and supported them through thick and thin. Neil Peart (drums), Geddy Lee (vocals, bass, and synthesizer) and Alex Lifeson (guitar) was a world renowned trio and that popularity has not waned. After they released their magnum opus 2112 Rush had carved their name in the annals of time and history, literally guaranteeing a level of success that few bands ever experience.
Counterparts was originally released in 1993 (their 15th studio release) and stands today as one their masterpieces of that decade. Audio Fidelity is once again releasing classic albums on SACD to add to their gold CD series, 180 gram vinyl and recently added digital HD releases.

SACD (Super Audio Compact Disc) offers more channels and a surround sound capability than a standard CD format. The popularity of the format came and went rather quickly making their availability rather scarce. Leave it to Audio Fidelity to fill that gap and make the quality sound of these CDs available for audiophiles once again.

A great choice to reintroduce SACDs to collectors was the Rush classic Counterparts as a Hybrid SACD limited and numbered release. The album is one of their most consistent releases from start to finish. Geddy Lee’s vocals had leveled out and became smoother several albums prior and their music still remained a powerful force to be reckoned with in the rock and progressive rock communities. This edition comes in a windowed slipcase with a booklet that includes all the lyrics for each track.

They made more sounds than three men possibly could and often times sounded like a 5 piece. Some of the tracks on this album had meanings to be reflected upon. In the 90s Aids still had its grip on us and “Nobody’s Hero” was a from the heart message to people suffering from the fatal disease. The tracks on the recording carried a definite rock edge that formed a continuous flow from one track to the next, unrelenting in its speed and sweeping power. The thing about Rush was you could count on lyrics that made sense most of the time. At times, like any other band, they would impart nonsensical verbosity upon your ears just for fun but for the most part each song had a meaning whether it was obvious or not to the listener. Sometimes the meanings would hit you after several listens. On this album it was all about relationships, although complicated at times, it was still straight forward compared to singing about the temples of gods and other esoteric subjects. Their drummer Neil Peart was a huge science fiction fan and the band’s main writer so that thought process was mirrored in their music.

Lee’s bass served as a lead instrument, in fact each player had their turn in the spotlight in this band and you can hear how commanding each musician is. Actually it makes all of them “lead” players that melded into one complete unit able to make incredible music with each release.

“Double Agent” was musicianship at a very high level as usual but the twist was Lee provided an offbeat spoken word style to the music which was a step away from their usual style. There was a bit of irony with a few of the tracks considering the subject matter that dominated the album. “Stick It Out” was another standout with its grungy bedrock of Lifeson’s guitar lines leading the way. Rush never sounded more relevant and rocking in the early part of the decade than on this straight ahead no nonsense rocker.

Progressive music by nature is experimental and many of the Rush albums became a proving ground for such musical interplay and dramatics. It worked just as it always did with the legendary trio from Canada. One of the reasons to pick up this release is for its value as a collectable but we should not forget how great this music was and still is. Counterparts was one of many groundbreaking albums for Rush and the SACD format is a good home for this particular release.