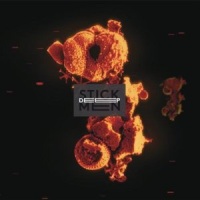 First I will give you a little bit of background information before we get into the nitty-gritty of this particular review of the recent Stickmen release Deep. Tony Levin (one third of Stickmen) released a solo album in 2007, called Stick Man where he was showcasing the Chapman Stick and this then led to Tony joining forces with drummer, Pat Mastelotto and Michael Bernier, another Chapman Stick player, and to take the name, Stickmen. This trio released an album called Soup in 2010 before Michael left to be replaced by Markus Reuter, and this trio has released and EP, Absolom (2011) and an album in 2012 called Open. That is the history lesson and it is time to have a look (or should that be a listen) to the newest release from the trio.

The three members of Stickmen, Tony Levin from King Crimson, Peter Gabriel etc (chapman stick), Pat Mastelotto, also King Crimson, (drums) and Markus Reuter, formerly of Centrozoon and Tuner, (touch guitars and electronics), have amassed considerable experience in the music business and the ability to produce intricate, yet at times, delicate music, which is displayed by this new release Deep.

Deep is a nine track album running for around 54 minutes with the longest track, “Whale Watch” edging just past the 10 minute mark (10:18) and the shortest track, ”On/Off,” running on for 3:57 minutes.

The majority of the tracks are instrumentals and this tends to make me a little concerned as I feel that the music has to be very special to contain the listener’s interest without the listener waiting on the vocalist appearing. Did Stick Men manage to alleviate any concerns that I had prior to the music emanating from the speakers? All will become apparent as we progress through the review.

Initial thoughts that appeared from the first listen to the album were a bit mixed. There were passages which I thought were excellent, but there were also areas when the interest seemed to drift, but certain albums take several plays before they manage to get “into your head.” Having now logged up many more plays I find that I favor the following tracks, at the moment, “Nude Ascending Staircase,” “Crack In The Sky” and “Sepia.”

“Nude Ascending Staircase” (5:05) is the opening track on Deep and is a real “tour de force” to start the album. It opens with some terrific interplay between Tony on chapman stick and Marcus on touch guitar and all ably backed up by the thundering percussion of Pat. The track literally grabs you by the scruff of the neck as it hurtles (sometimes reaching breakneck speed) toward its time limit of 5:05 minutes. There are a few little motifs that appear from time to time and mark it as an excellent opening track.


Track 5, “Crack in the Sky” (5:46), is a much more moody, atmospheric piece of music, with the deep whispered lyrics, from Tony, lending to the darker mood of the piece. There are beautiful passages of melodic guitar from Marcus which trade places with the vocals. While this is a superbly worked track, my mind did a double-take on the style of the vocalized whispering, which I finally determined has the same “feel” to it as Robbie Robertson on “Somewhere Down The Crazy River.” Despite that unexpected link, the track is a superbly crafted passage of music.

The second to the last track on the album is “Sepia” (8.55) and is again another deeply atmospheric piece. This starts with a stunning sequence of repeating passages of guitar work and builds slowly, with layer upon layer of sound, before morphing into a passage of mesmerizing shifting sounds in a sparse soundscape. Around the 7 minute mark, the opening sequence returns to take the track out. Simply because of its very different structure, this track holds the listener’s interest from the first few notes.

This release from the Stickmen, Deep, certainly has its moments, especially the three tracks I have highlighted, but I do feel that some of the other tracks just don’t seem to do the band justice. My initial concerns, as with all instrumental albums, and this is a mainly instrumental album, is simply, does it have enough going on to grab the attention of the listener from the start to completion? Sadly, in this case, I feel that it just hasn’t reached that point, despite some stunning moments in other tracks, such as “Hide The Trees” and “Whale Watch.” I feel that too often the music lurches close to “soundtrack music” and as such,  just doesn’t have what it takes to lift it into those areas of your mind that shout out “Brilliant!”

Deep is certainly an album that deserves a listen as there are areas that are simply stunning, but it doesn’t maintain those high levels for the duration of the 50+ minutes.