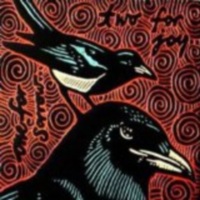 From as far back as 1999, when they first got together, the band, Thieves Kitchen have been producing creative progressive music and to date, have produced 5 albums, starting in 2000 with Head and now in 2013 with the newest release, One For Sorrow, Two For Joy. In fact it has taken 5 years to release One For Sorrow, Two For Joy, the follow up to the 2008 album, The Water Road.

Thieves Kitchen are a 3 piece band comprising, Amy Darby (vocals), Phil Mercy (guitar), Thomas Johnson (keyboards), who are joined by Brad Waissman (bass), Paul Malyon (drums) and  Anna Holmgren (flute) for the latest release. One For Sorrow, Two For Joy contains around 57 minutes of music spread over 7 tracks. The shortest track on the album is the title track, track 1, and it runs for well under a minute at 17 seconds, in comparison with the longest track , “Germander Speedwell,” which runs the clock on until 14:32 minutes.

So, the big question is “What have Thieves Kitchen come up with after 5 years?” - Well let’s progress on into the review and find out. The band’s music is described (by the band) as a blend of Canterbury, folk, fusion, symphonic and rock, producing music as adventurous as it is familiar, as melodic as it is intricate, with an Englishness to the sound and a Swedish flavor to its texturing ultimately resulting in a unique sound. Listening to the album “One For Sorrow, Two For Joy” makes me think a little of a more laid back, mellow Kaipa, who also hail from Sweden.

Highlights of this album for me, at the moment are, “Hypatia” (8:56), “A Fool’s Journey” (8:19) and the long “Germander Speedwell” (14:32). Each track is a mesmerizing concoction of slow/quick passages, superb keyboards/guitars and the voice of Amy Darby.

“Hypatia” has a very short flute passage as an introduction to the crystal clear vocals of Amy Darby, and then the keyboards of Thomas Johnson appear as the track continues to build up. Just after the 1:00 minute mark, there is a change in the tempo and a superb passage of keyboard and guitar (Phil Mercy) over a very rhythmic drum/bass engine. There is still an almost pastoral feel to the track, prior to the guitar of Phil becoming more emphatic in the majestic passage before the level falls to allow the drums and keyboards to merge the track into the sublime flute passage and on past the 4:30 minute mark when the bass and piano take the “up-front” mantle with the piano melody simply fantastic. A superb guitar enters the fray around the 5:45 minute point and carries the track along with the keyboards merging to boost the sound before a passage of “pomp” preludes the return of those clear vocals and a return to the original theme. The 8:00 minute mark sees the return of the earlier up-tempo passage which then takes the track out. A stunning track which continues to sound even better, the more times it is played.

Heavy guitar riffing starts  “A Fool’s Journey,” before the entry of Amy’s voice, and continues behind the vocals with the guitar starting to “soar” at points. Keyboards supplement this “heavy” sound as the track progresses with the original theme until around the 3:00 minute point. The keyboards then take on a more prominent role, while still behind the vocals and the track drives along until the 4:15 minute mark when there is a marked change in style and tempo. There is a great bass (Brad Waissman), drums (Paul Malyon) and guitar passage before the flute, followed by a superb synthesizer passage, before the sound falls again to allow a simple synth melody to carry the track. Phil (guitar) gets a great “look-in” around 6:15 minutes and shows how good a guitarist he is. Back into the heavy riffing and that crystal clear voice of Amy which usher the track out, together with a couple of false endings.

Countryside birds chirping, running water and a “music box” style melody heralds the start of “Germander Speedwell” before a simply stunning acoustic guitar melody, backed by a cello (?), carries the track on. The flute and synthesized strings allow the track to build and then the flute picks out a memorable simple melody. The rhythm engine of the band start to become more prominent as the song gathers momentum around the 2:15 minute point. A stunning passage then sees the flute and the piano to the fore with the synthesized strings building in the background. The gentle flute and the acoustic guitar around the 4:00 minute mark usher back in the vocals and the bass/drums and synthesizers again become a little more marked. The clarity of the vocals allows the lyrical quality of the track to be easily appreciated. The acoustic guitar is supplanted by the electrical variant of the instrument around 7:00 minute point and plays out an excellent riff complemented by the keyboards and that very tight-knit rhythm engine. Another keyboard passage fades back into the acoustic guitar, flute and cello passage from earlier. Amy returns around 9:15 minutes backed mainly by terrific bass and drums before that superb electric guitar passage returns and, together with the rest of the band, had this reviewer being reminded of early Focus in full flight, before the keyboards move the song along and the levels start to build as the track nears completion. The long building finale is a stunning end to a track that set out 14:30 minutes before in a very gentle pastoral style.

I have been aware of this band for a while and indeed, have played tracks from earlier albums on the show, but I now have new material to put into playlists. I’m running out of these “One To Buy” stickers such is the standard of many of the CDs recently, but this deservedly falls into that category. An album that has terrific examples of light and shade in the music with heavy riffs sitting easily next to gentle flute/acoustic guitar passages and maintaining the listener’s interest with sudden time changes. This is a great purchase for any prog fan and one that will not disappoint in any way.

©MuzikReviews.com
For Questions Or Comments About This Review Send An Email To info@muzikreviews.com