Review: Yes-Close to the Edge (SACD) 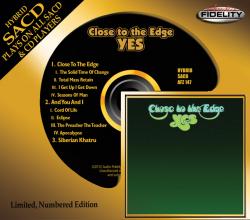 Yes is a legendary progressive rock band that does not need an introduction. Their mark on music is well documented and with the release of Close to the Edge in 1972 their immortality was assured. The previous release Fragile was also a classic 5 star progressive rock masterpiece. Audio Fidelity is now introducing their SACD numbered and limited version of this cornerstone of prog rock. Anyone familiar with this band’s recorded output would be hard pressed to come up with two better releases. In one minute shy of 38 minutes you get everything that makes 70s prog rock the memorable experience it always has been and will continue to be.

The classic lineup of Chris Squire (bass, vocals), Rick Wakeman (mellotron, moog, Hammond organ, piano), Steve Howe (electric, acoustic guitars), Bill Bruford (drums and percussion) and Jon Anderson (vocals) take their music to great heights in three suites. There is a reason a magazine like Guitar World ranks this recording as number 67 out of the 100 greatest guitar albums of all time. Steve Howe’s magnificent craftsmanship on the six-string drives each track along with power and beauty in every instance. Jon Anderson’s angelic voice and spiritual lyrics create an atmosphere that have yet to be reproduced by any lineup that the band has presented since their existence. Rick Wakeman’s keyboard wizardry is jaw dropping (as always). At times when the pace slows down and the music takes a softer path, he sounds as if he is playing in the middle of an ancient cathedral. Part way through the first suite of “Close To The Edge” you get many different tastes of the Yes cannon of sounds, textures and atmospheres. It becomes apparent rather quickly that you are listening to some of the most astute and adept musicians that have graced our presence on this planet.

Each suite seamlessly flows and connects to the next which makes it all that more incredible. Pulling off such a complex and extraordinary recording was a monumental achievement in 1972 and it would be as well today.

There is a difference in sound regarding all the formats available on CD today. SACD is well suited to the subtle and equally obvious nuances music like this has to offer the listener. Having heard my share of remastered versions over the years of Yes albums, I would have to say this is one of the best yet.
Close to the Edge is a tour de force brought to life on the colorful canvas of music. There are few bands that could accomplish this feat successfully and Yes did it all with a style and a preciseness that has yet to be matched.

If you are progressive rock fan, a Yes fan or a music collector, any of these or all of the above, you will need to hear this great album on Audio Fidelity’s SACD version. This should not be missed.