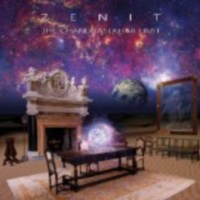 This review is on a release that I probably would not have unearthed on my own, so yet again I have to be thankful that I do a review slot. The album is The Chandrasekhar Limit and is release number three from the Italian speaking Swiss band, Zenit. Originally founded back in 1998, they released their debut album, Pavritti, in 2001 and their follow-up, Surrender, in 2006. Currently a 5 piece band, Zenit still have two of the original members from 1998, the keyboard player and the bass player. The full breakdown of the band is - Lorenzo Sonognini (acoustic guitar and vocals), Luigi Biamino (guitar and backing vocals), Ivo Bernasconi (keyboards), Andy Thommen (bass and backing vocals) and Gabrielle Schira (drums and percussion).

Founder and bass player Andy Thommen says, “We've chosen The Chandrasekhar Limit as the title because this mathematical threshold defines if a white dwarf star remains a star or becomes a black hole... So, as a band we feel that we are passing a crossroads without knowing where this track leads to. We do not know if we are above or below the Chandrasekhar limit.”

Unusually for me, I will state at the outset that this is one of those releases that hit the “sweet spot.” There have been some amazing albums released recently, but this is one of the “head and shoulders” above the majority, and that was a decision made after only one hearing.

The Chandrasekhar Limit is a 6 track album with a total running time just under 70 minutes, with track 2, “Cub Lady”, the shortest at 2:42 minutes and the final track, “The Daydream Suite”, the longest at 24:35 minutes.

Now we can get down to business explaining why this is such an awesome album to have reviewed. I will admit that I enjoy all the tracks on the album and in the 10 days I have had the album to review, two tracks have already been featured on my radio program.

The opening track on The Chandrasekhar Limit is all that the first track on any release should be, and that is, instantly accessible and with killer riffs, passages and vocals. “Awaken,” (12:05) certainly ticks all of these boxes when after around 15 seconds of acoustic guitar with vocals, the track launches into a superbly memorable soaring guitar and keyboard riff which continues to weave in and out over the length of the track. There is an amazing passage from around 4 minutes (until just short of the 8 minute mark) where, over the terrific drumming by Gabrielle and bass work by Andy, the soaring guitar of Luigi lays a tremendous passage over the top, with the keyboards of Ivo weaving here and there in the background. This passage is very reminiscent of early Pink Floyd material. The track then breaks into a plaintive piano passage which fits so well and this is then joined by the superb acoustic guitar work of Lorenzo. Around the 9 minute point, we have rejoined the recurrent theme from earlier and the track builds and drives along to 12 minutes with stunning guitar and keyboard effects during the last minute.

“Matrimandir” (17:08), is the other track I have featured and has a very Indian orientated sound to it with some of the ensuing vocals in Sanskrit and English. A sitar and a very ethnic sounding background show the versatility of the band prior to the electric guitar picking up and carrying the sitar riff onwards. Slight changes in tempo are used to accentuate sections and Luigi (on guitar) certainly shows he can play the instrument. Lorenzo’s vocals are extremely clear, even when they might not be understandable as they are in Sanskrit. At around the 4:40 minute point, there is a very distinct shift to a more jazz fusion passage with electric piano, guitar and simple crisp drumming before the keyboards briefly enter and leave again. Andy, on bass, also gets the opportunity to push the bass guitar to the fore in this passage. About halfway through the track, it morphs into a simple acoustic guitar passage with an almost choral vocal over it before the bass again adds more depth to the proceedings. There is more of the magnificent piano around 11:30 minutes which takes the track into another beautiful acoustic area which builds to the whole band in full flow again. The track then moves into its final phases where the initial theme reappears and the track plays out as it started over 17 minutes before.

The other four tracks on The Chandrasekhar Limit are no less interesting, leading to another 5 star award earner. “Cub Lady” is a short acoustic based track and “PiGreco” is a keyboard driven up-tempo track with powerful vocals and superb drum/bass playing and ”Pulsar” is an instrumental and probably nearer a jazz fusion track than the others. The long last track, “The Daydream Suite,” certainly has its dreamy passages interspersed with more magnificent individual performances to end the album on a “huge high.”

At the outset, I indicated that this was to be an extremely positive review and I repeat, that even with all the tremendous recent releases, this is certainly close to being the best CD I have had to review (Well, at least in the Top 3).

Another of my special double-sized, full color “One To Buy” stickers on the front, and I might have to get more printed if releases continue to be superb, and a plea to every prog follower to beg or borrow (we don’t advocate the stealing) this CD and then do the “right thing” and buy it. I do not think that anyone would find The Chandrasekhar Limit anything but stunning.