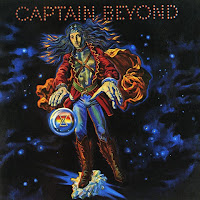 Los Angeles, CA… Purple Pyramid (a subsidiary of Cleopatra Records) will release a rare album from one of the original American prog outfits, Captain Beyond. LIVE IN TEXAS – OCTOBER 6, 1973 drops on CD and vinyl on May 7One of the earliest “supergroups,” Captain Beyond was formed in 1971 and fronted by vocalist Rod Evans, who sang in “Hush”-era Deep Purple. Bassist Lee Dorman and guitarist Larry “Rhino” Reinhardt were in Iron Butterfly. Bobby Caldwell drummed for The Johnny Winter Group, arguably one of the biggest live acts of the time. The level of musicianship, power, and intricacy of this genre was unique for American bands – prog was largely a European import at the time – and stateside audiences were small, but rabid.


Recorded just after the release of SUFFICIENTLY BREATHLESS, the band’s second album, LIVE IN TEXAS captured Captain Beyond while on tour with King Crimson. The amazing liner notes were written by famed rock historian Dave Thompson. Through extensive conversations with Caldwell, the story of Captain Beyond unfolds, including listening parties with the Allmans, the unusual signing to Capricorn Records, and a fruit-flinging show with Sha Na Na.


3. Dancing Madly Backwards (On A Sea Of Air)