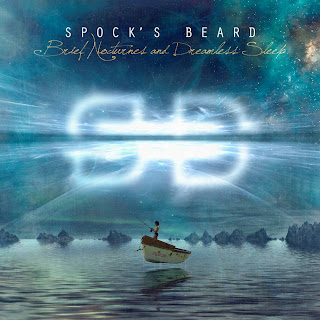 Los Angeles, CA - Prog legends Spock's Beard, in support of their newly released and critically acclaimed album, 'Brief Nocturnes And Dreamless Sleep', are filming a video for the track “Submerged.” The three-day shoot is based in Los Angeles, and inside sources say it is a full-on music spectacle! Released on April 2nd, 'Brief Nocturnes And Dreamless Sleep', marks the return of Spock's Beard to the InsideOut Music label, and the two-disc set has been garnering rave reviews from fans and critics alike worldwide.

Founding band member Alan Morse comments about the video: “'Brief Nocturnes And Dreamless Sleep' is a new and exciting direction for us, and when we read the director's treatment for the video, we immediately knew we had found the perfect person to help us bring our musical vision to the screen. It is equal parts performance and concept, and there will be as many twists and turns in the video as there are in our music. You'll never hear 'Submerged' the same way again.”

In their 20 years together, Spock's Beard have built a reputation for invention, musicality and sheer restive energy. Yet perhaps nothing they have done before can properly prepare you for their 11th studio album. 'Brief Nocturnes And Dreamless Sleep' is an album that will constantly surprise. Featuring the recording debut of long-time tour drummer Jimmy Keegan (Santana), and vocalist/guitarist Ted Leonard (Enchant, Thought Chamber), it also sees the return of a familiar name to the song-writing credits - Neal Morse, who has co-written two tracks, his first since leaving the band more than a decade ago.

Gary Brown of Classic Rock Radio Dot EU raves about Spock's Beard's 'Brief Nocturnes And Dreamless Sleep', “Perfect album from start to finish...one of the best hard rock/mainstream prog albums I've heard in a long time!” Ytsejam touts, “In the end, it is the Spock's Beard album we all have been waiting for, as Morse, Meros, Okumoto, Leonard and Keegan have produced another excellent offering of musical mayhem. A true testament to what progressive rock is in the 21st Century and beyond.”

Co-produced by Alan Morse, Rich Mouser and John Boegehold, 'Brief Nocturnes And Dreamless Sleep' is described by Meros as, “quirky, edgy, and reminding us a little bit of older times in the band, but also taking us further forward.” In regards to the song the band is filming the video to, “Submerged”, Dave explains, “Ted had originally written and recorded this for his solo album 'Way Home' (released in 2007), and it's a real stadium rocker. We've adapted it to our own sound but stayed faithful to Ted's original arrangement. I wouldn't say it's strictly Prog Rock, but fits what we do and is a great song.”