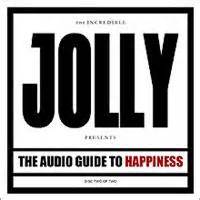 Jolly is a progressive rock band from New York consisting of members Anadale (vocals, guitar), Joe Reilly (keyboard), Anthony Rondinone (bass), and Louis Abramson (drums). The band formed in 2008, and released their debut album, Forty-Six Minutes, Twelve Seconds Of Music, in 2009. After the release created a small buzz, the band signed with Inside Out Music. In 2011, Jolly released the first of a two part album series entitled The Audio Guide To Happiness. This year Jolly completes the journey to happiness with The Audio Guide To Happiness Part 2.

The two album series are concept albums that are scientifically designed to bring the listener to a position of happiness. Jolly used binaural tones throughout the albums to help bring the listener to their state of happiness. Binaural tones are two tones with slightly offset frequencies played simultaneously in stereo headphones. While listening to these tones, the brain will perceive a third “phantom tone,” and this third tone will alter the brain’s natural frequency. The result will be an altered state of consciousness, and the listener will feel “happier.” Jolly worked with a university professor who administered studies on over 5,000 subjects to help the band correctly use binaural tones and achieve the best listening experience. The two albums are made up of four stages, acknowledging confinement, diffusing coping mechanisms, transcending the subjective, and achieving happiness. These four stages are introduced by a very calm woman’s voice.

With all that aside, the music of Jolly’s latest release, The Audio Guide To Happiness Part 2, has some good music. The band creates a balance between a hard metal sound and smooth melodic rock. This is best represented by lead singer, Anadale, who has some slightly gritty vocals, but can also provide smooth harmonies. With this second album of the series having a running time of just short of an hour, it’s a lot of music to take in, especially if one listens to parts one and two in one sitting. Even with the amount of music, these albums contain some songs worth the time.

“You Against The World” is a great Jolly song that represents the band’s sound well. Anadale provides some great vocals on this, and the band’s harmonies during the choruses are superb. Louis Abramson keeps a great beat going with his drumming, and Andale completes the package with his guitar playing. Anthony Rondinone’s bass skills are also worth noting in this song.

The first song on the final phase, “Lucky” is a more upbeat song. Joe Reilly’s video-game-sounding keyboard helps with this more upbeat feeling. Also, Anadale’s singing has a more friendly and positive tone on this track. Even the song’s theme of being lucky is a more positive image the band presents.
“The Grand Utopia,” the final track of The Audio Guide To Happiness, is an excellent song. While listening to the album, Jolly seems to be progressing as a band from track to track, and “The Grand Utopia” is their most progressive song of the album series. Reilly’s keyboard playing gives the song a different feeling from the rest of the album, with it being more prominent than in previous albums. Anadale provides his best vocals on this song with some really nice melodies.

Jolly is great band that isn’t afraid of trying new things with music, and The Audio Guide To Happiness is a great example of that. Whether the albums actually make you happy are not, they are filled with some great music. It is nice to see a band that doesn’t stick to the same formula of a half hour of music that contains one or two singles and a lot of filler. These albums are great from beginning to end. I can’t wait to see what Jolly comes up with next. If you’re looking for a new musical experience or maybe if you want to be happier, check out The Audio Guide To Happiness.

Key Tracks: You Against The World, Lucky, The Grand Utopia

Get Band email for free at ReverbNation.com