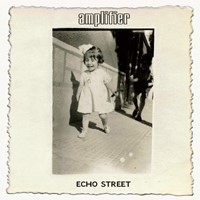 Following up a critically acclaimed album can be nerve-racking for a band.  The pressure to recapture the success of the previous work can be enormous.  Few let it faze them and continue right along producing fine work.  This seems to be the case with Amplifier.  It took them four years to make The Octopus, but a mere sixty days for their fourth album Echo Street.  Fans will be happy to know that shorter production timetable did not affect the quality.

Hailing from Manchester, England, they are Sel Balamir (vocals, guitar), Matt Brobin (drums), Steve Durose (guitar), and Alexander "Magnum" Redhead (bass). Echo Street marks their first album as a four-piece band.  Balamir has an admirable take on Amplifier’s musical progression: “It's important that people understand that not everything will be like what has gone before. I never want to repeat myself.”   This is always good to hear, especially from a band in a genre with the word “progressive” in it.

What I like about Echo Street is that each song has its own unique atmosphere.  “Matmos” is poetry to the ears with its surreal lyrics backed by a meditative opening.  The music goes along with this atmosphere just like the way dreams change and seamlessly move from one image to another.  Following it up is “The Wheel.” This one is darker than the opener with its metallic and mysterious opening.  There is a sense of claustrophobia running throughout the song, of being trapped with something lurking in the shadow that is too clever to be seen.  The haunting “Extra Vehicular” has a thread of sadness running throughout the song.  My main problem with this song is its length.  At just over twelve minutes, it wears on me around the seven minute mark. I checked to see how much was left and was surprised to see all the time left in the song. I do not mind long songs, but they should not feel long. With its mellow, folksy opening, “Where the River Goes” is refreshing like a cool breeze on a hot day. It keeps getting better in the second half as it transitions into a blistering rock song.

“Paris in the Spring” is one of those songs that sound light and sweet until you pay attention to the lyrics: So come / Walk with me down streets of rain / Long gone are the tears of a child that weeps / So let’s dry those cheeks / As cold as the world is outside / We’ll run away and hide / Its only goodbye / Till I see you again.  The melancholy of this song is inescapable.  There is no need to get down because “Between Today and Yesterday” is more stoic in nature with lyrics such as So never try to turn your head /
Avoid the bitterness and It’s better to leave your frustrations / And ride the train as far as it goes.  The title track “Echo Street” is the most ambient song on the album. This is the type of song where you should just close your eyes and let the music take you away. “Mary Rose” ends the album on a positive note. Less dark than the others, it is hard not to be taken by the song’s message.

The progressive rock genre is in fine form with bands like Amplifier making music.  Echo Street is like listening to the musical version of a dark dream.  This is one album that progressive fans should not let fly under their radar.

Key Tracks: The Wheel, Where the River Goes, Mary Rose