Review: Greg Lake-Songs Of A Lifetime 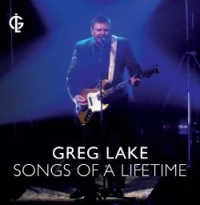 The album for review this week is the new release by Greg Lake, entitled Songs Of A Lifetime. Greg Lake is, of course, a household name in the progressive genre, as he was a founding member of King Crimson (along with Robert Fripp) and Emerson Lake and Palmer (ELP).

Songs Of A Lifetime is a recording of an evening of intimate, interactive musical reminiscences which are full of drama, pathos and humor. I approached this release eagerly, offering as it does a solo concert with music from King Crimson and ELP plus insightful information and witty anecdotes, and my thoughts turned back to a similar, but live, evening in the presence of Rick “The Caped Crusader” Wakeman, who surrounded by banks of keyboards, serenaded the hall with excerpts from classic prog albums and entertained with many anecdotes.

To the matter in hand then, with this release from Greg Lake, Songs Of A Lifetime, and a detailed review of how the “evening” progressed listening to the performance.

Songs Of A Lifetime is a single disc, which is an initial surprise when the track listing is looked at, with a running time of around 74 minutes for the 20 tracks. The shortest track is the album opener, “ 21st Century Schizoid Man,” lasting a mere 1:00 minute and track 5, “Tribute To The King,” being the longest at 7:03 minutes.

Highlights from the album after several listens to some very familiar material, are “Lend Your Love To Me Tonight,” “From The Beginning,” “Epitaph/Court Of The Crimson King” and “Lucky Man.”

“Lend Your Love To Me Tonight” (3:39), is originally from The Works by ELP and this version has that superb Greg Lake voice in fine fettle. This is an excellent version, powerful, atmospheric and outstanding and is, in my opinion, the best track on the album. The superb acoustic start to “From The Beginning” (5:04) sets the scene for another stunning version of an old ELP favorite. The Greg Lake voice is smooth although I did notice that there is a change in the “quality” of some of the vocals and I assume that has been caused by taking tracks from shows on different evenings. King Crimson is the source for “Epitaph/In The Court Of The Crimson King” (5:05) and another powerhouse for Greg but I started to wonder why the backing material is all prerecorded, some from original early material and some subsequently all redone by Greg. I really think that having a live band would have added another dimension to the evenings. A song that Greg wrote when he was only 12, is the last of my highlighted tracks, and is the simply stunning “Lucky Man.” This version is still as magnificent as the original, all those years ago, and that manic synthesizer outro is still “out of this world.”

I will admit to being a bit deflated by Songs Of A Lifetime and there are several reasons. I think, as to why I have this feeling. Over 30 minutes of the CD is turned over to the anecdotes, which, interesting and funny they may be, but once heard, I tended to skip past these tracks on future listens. I also appreciate that Greg was paying homage to the other artists that he covers, namely Elvis and The Beatles, but I’m not sure these tracks really work. The final reason that I don’t think Songs Of A Lifetime really hits the nail on the head, is the fact that the backing to the tracks is all prerecorded and therefore precludes any form of spontaneity during the performance. At times, my feeling was that there was a bit of a sterile feel to some of the tracks.

Although I did find some excellent passages, and his voice is certainly still very powerful (on some tracks), I did find that looked for the original King Crimson and ELP tracks once Greg had given a sample of the material.

What seemed an excellent idea at the outset, didn’t quite work, although if you had attended one of these evening performances, it would be a great reminder and I think that a DVD of the evening might have been a more successful way to have progressed. Songs Of A Lifetime is certainly worth a listen, but not something that I would go back to time after time.

Key Tracks: Lend Your Love To Me Tonight, From The Beginning, Epitaph, Lucky Man