Review: Half Past Four-Good Things 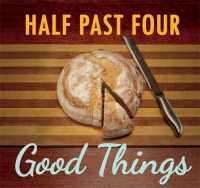 Half Past Four are a Canadian progressive rock band that initially started to evolve around 1999, when guitarist, Constantin Necrosov, joined forces with the bass player, Dmitry Lesov. Now, in 2013, we have the current up-to-date lineup of the band which includes Igor Kurtzman on keyboards (2002), Kyree Vibrant on vocals (2005) and Marcello Ciurleo on drums (2012). The first full length album from the band, Rabbit In The Vestibule in 2008, received critical acclaim and on my desk now, is the follow up to Rabbit, released on the 13th of April, Good Things.

To take a little information from the band website, they class themselves as an art rock band, aiming to create music which is smart, novel and firmly rooted in the progressive genre and with a huge “tip of the hat” to jazz-rock fusion. Certainly there is a refreshing newness to passages in this new album together with the familiarity that listeners to early Genesis, King Crimson, Frank Zappa and the ilk will recognize.

Good Things is a 12 track album lasting around the 70 minute mark, with the shortest track, track 7, “Spin The Girl” clocking in at 2:42 minutes and the longest track, track 9, “I Am Lion” which runs on for 6:34 minutes.

I have listened to this album over the last 10 days or so and can say that I am very impressed with some of the musical passages contained therein, and have already aired the long track, “I Am Lion” on my radio show. So are we all sitting comfortably as this reviewer “spills the beans” on Good Things by Half Past Four. There is a lot on show over the 12 tracks and I have concentrated on the three tracks that I currently favor. The tracks in question are, track 1, the opening track “It Strikes You,” track 3, “ All Day And All Night” and track 9,” I Am Lion.”

“It Strikes You” (4:26) starts with a “talk box style” introduction over the keyboards, drums and bass, with the voice of Kyree coming in over the top. (The talk box style harks back to the mid-70s and Peter Frampton.) The clear vocals of the female singer lead into a bit of heavy riffing before returning to showcase the vocals again. There is a good guitar break around the 1:30 minute mark, allowing Constantin a little time in the spotlight, with the keyboards starting to make themselves heard from time to time before taking center stage at around 2:40 minutes and shows the skills of Igor. There is then a return to the “talk box” style before Kyree returns to take the track out. This is an interesting opening track to Good Things, with a lot going on in the 4+ minutes. It certainly alerts the eardrums that this could be a very good hour plus starting up.

“All Day And All Night” (4:44) starts with keyboards and acoustic guitar leading into a jazzier, bluesy Kyree vocal. The keyboards certainly shift into the jazz genre area as the song continues at a slower pace than previous tracks. The intensity builds in Kyree’s voice and then lowers again to allow a much muted, almost brash like guitar theme. At this point, the vocals from Kyree tend to be a bit off putting, never discordant but almost metronomic in delivery, but they are soon replaced by a terrific passage from the guitar of Constantin. There is then a move into whispered male vocals behind the lead of Kyree which adds a different dimension to the vocals. There is a very good gentle keyboards passage that takes the track to the end.

There is a very atmospheric, almost spacey, feel to the start of “I Am Lion” (6:34), with keyboards and guitar over the tight bass and drums. The lead guitar work is very interesting leading up to the vocals appearing. This is an excellent track from the four musicians, but the vocals bring the overall impression of the track down slightly. There is almost the feeling that they ran out of lyrics when there is a repetition of “da de da de dah” vocals which doesn’t add anything to the song, in fact, it does the exact opposite. I would have preferred to simply allow the track to continue with no vocals present.

It may seem slightly unusual, having given these three tracks as tracks that I favor, to then not praise them out of sight. The reason for this is that I have concerns about the album, in that, there are simply superb passages on show, but tempered with that, there are passages which simply don’t gel. I could pick almost any of the tracks and make both positive and negative comments about each. My impression is that here we have a band with many, many ideas, but who have then tried to implement everything into this album with the result that it doesn’t work. The tracks have amazing guitar passages (e.g. the guitar styling of the Surfaris/Ventures on track 4), jazzy passages, and some excellent vocals but at times it just doesn’t come together. Quite why tracks 7 and 10, “Spin The Girl” and “Wolf,” have been included, I am not sure, as the musical styles bear no link to the rest of the album.

“Good Things” doesn’t really live up to its title. What it is an example of, is a band that has terrific ideas, but needs to focus on the better passages contained within the album, to show what they can achieve. This album should be looked at as a sort of musical crossroads, where the musicians involved are all excellent but need to move the band in a particular direction. I think I will look forward to the next album with a lot of interest.

Key Tracks: It Strikes You, All Day And All Night, I Am Lion