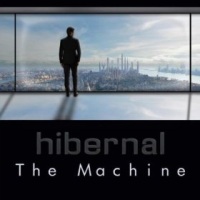 Hibernal is a concept album which sets out to use the spoken word, as opposed to singing the narrative, within the context of progressive music. The concept relates to an employee (male) moving upwards in the company he works with, but loses part of himself every time he gains promotion. Hibernal is really Australian Mark Healy, solo composer and instrumentalist, who enlists the services of a select few to narrate throughout The Machine. The small narration cast are Rowan Michaels (narrator), Samantha Beart (Jane) and Robert Blythe (Mr Wilkins), who carry the storyline through the hour of The Machine.

The Machine is an 11 track concept album, with track 6, “Hard At Work,” being the shortest at only 1:46 minutes and track 9, “Disconnection,” the longest at 10:00 minutes.
As with all concept albums, the difficulty can be in singling out tracks as “the best bits,” as the album should be heard in its entirety. With that in mind however, the tracks that are, at the moment, foremost in my mind are “Downward,” “Home” and “Disconnection”.

“Downward” (8:34) is the second track of The Machine, following on from the relatively short opening track which begins the journey. There is a glorious sounding, chiming guitar melody, before the drums (which can seem close to being programmed at times) and bass fill the sound out. Around the 1:30 minute, there is a superb melody produced on the guitar which is instantly memorable, before the track changes to allow further narration of the story. Behind the narration, the music continues to provide a stunning soundscape and at about 5:00 minutes, the guitars, drums and bass return, but are much more assertive in the manner of the light and dark passages bands such as Porcupine Tree produce. The track continues with changing emphasis on bass, guitar and intensity. The final minute or so of this track includes some of the most intense guitar thus far heard.

Track 4, “Home” (3:03) is indeed just that, as the “hero” returns home and explains his promotion. There is some superb acoustic guitar playing behind the narration, prior to the bass and drums joining in to change the sound of the track, with some stunning lead guitar work over the top. The sound then drops to allow another piece of narration to take the track out.

“Disconnection” (10:00), track 9 and the longest on the disc, begins with more of that superb interplay between guitar, bass and drums before the electric guitar carves its way, melodically, in over the top. Around the 1:20 minute mark, the narration appears while the music continues to burble away in the background with the electric guitar riffs around the 2:00 minute point, signals a hardening to the sound of the track with complementary bass and drums. The track then slips back into the narration mode to explain the continuing storyline, then another superb lead guitar driven passage, moving into another harsher sounding section again. Just after the halfway point in the track, another chunk of narration leads into a beautiful acoustic guitar passage which slowly builds in intensity as the “hero” voices concern and confusion are just behind the main melody. Ultimately the electric guitar picks up the melody and takes the track towards its finale, with the intensity increasing as the track finally finishes.

My initial reaction to The Machine on first hearing was one that I can safely say I had not previously experienced with a new CD. I thought that the music was superb; varying as it does from the acoustic to the electric and from soft to harsh melodic passages, but the solely spoken narration seemed at odds with the musical setting. Many concept albums have spoken passages to link areas of the concept, with much of the storyline being covered in the lyrical content and The Machine sits firmly outside this “norm.” Several listens later and I am not sure I can explain why this album works so superbly: perhaps it is just a variation on a theme of “opposites attracting.” The overall outcome is that this album definitely gains one of my “One To Buy” special stickers. This is a stunning work of art by a man, Mark Healy, who had the vision that this combination would work.

Take a huge bow Mark while I gently whisper the question “where do you go from here?” How exactly   Mark will follow this “monster” remains to be seen, but this reviewer will be very interested in the direction he takes. Until that happens, listen to The Machine in its entirety and rest assured the experience will last forever, or at least a very long time.
5/5 Stars