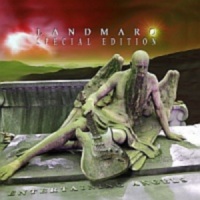 Landmarq is a UK 5-piece band, formed in London in 1990. Prior to this new studio album being released, they have issued four studio albums, Solitary Witness (1992), Infinity Parade (1993), The Vision Pit (1995) and Science Of Coincidence (1998), and so there has been a 14 year wait for this, the fifth studio album, Entertaining Angels (Deluxe Edition). The main reason for such a long period of time between these albums was the illness of the female lead singer, who has now returned to fine form after making a full recovery.

The current lineup of the band is Tracy Hitchins (lead vocals), Uwe D’Rose (guitars), Steve Gee (bass/vocals), Mike Varty (keyboards/vocals) and Daniel Martin (drums) although Dave Wagstaff was the man on the drum stool for the album. Entertaining Angels (Deluxe Edition) is a 2 disc set which has a total running time of around 100 minutes. Disc 1, the main disc, comprises of 8 tracks and lasts about 71 minutes, while disc 2, the bonus disc, has a further 4 tracks and a running time of around 29 minutes. Shortest track on the main disc is track 2, “Glowing Part 1: Friends” which is 4:05 minutes and track 8, the final track, “Calm Before The Storm” is a real tour-de-force lasting in excess of 16 minutes (16:11).

Having not been a Landmarq enthusiast previously, mainly due to the fact that my only knowledge of the band prior to this album review, was a single track on a sampler album from earlier in 2012, I settled down to give Entertaining Angels (Deluxe Version) an initial listen to get an immediate impression. That first impression was very favorable and I certainly looked forward to further runs through the album to finalize this review.

This album is a fairly difficult album to pull some highlighted tracks from, as the achievement level in terms of auditory satisfaction is very high across the board. As disc 2 is a bonus disc, I will limit my choices to the main disc. At the moment, the tracks that I am listening to more are, track 1, the title track, “Entertaining Angels,” track 4, “Mountains Of Anglia” and the long final track, track 8, “Calm Before The Storm.”

“Entertaining Angels” (8:31), the opening, and title track, is a superb start to the album. Gentle synthesizer warblings build to a simple guitar melody which instantly “grabs your ears” allowing Uwe D’Rose to show his skills straight from the off. At around the 2 minute mark, the guitar melody changes to a more strident “harsher” sound and also heralds the entry of Tracy Hitchins vocals. Her voice simply “drips” emotion and soars astride the subdued backing of the band. A change in tempo around the 4 minute mark also sees a change in the vocals from Tracy which fit the music so well. Returning to the soaring vocals and a repeat of the time change follows to remind the listener of the recurring melody. Just after 6 minutes there is a superb saxophone passage, backed by piano and that unobtrusive but stunning engine room of drums (Dave) and bass (Steve) which has permeated the track. Tracy returns again to the soaring vocal performance of earlier that also heralds the ending of the track.

Track 4, “Mountains of Anglia” (8:56) is another of those “builder” tracks which increases in intensity from the start. The guitar of Uwe, above the simmering sound of the rest of the band, soon gives way to the throaty vocals of Tracy with some more forays into the soaring vocals sphere. The band continues to drive along behind the vocal with more great guitar from Uwe and keyboard passages from Mike, weaving in and out above the foundations of the drums and bass. That superb saxophone from track one reappears after a change of pace, sounding very melancholic, with subdued guitar/keyboards in the background and more of those stunning vocals. There is a very large “ tug of the forelock” towards  Pink Floyd, although never copying, it simply oozes the “feel” of that classic band.

The final track on disc 1, “Calm Before The Storm” (16:11) is really a mini suite in 3 parts, “Strange But Beautiful,” “Spiderman” and “From The Abyss” which merge seamlessly into one piece of music. Keyboards swirl and Uwe’s guitar picks out a simply melody which hits high intensity very quickly. A change of pace around 1:30 minutes to acoustic strumming, allows the whispery vocals from Tracy to enter and then build. Stunningly melodic, the track moves along highlighting the vocals which have, from time to time throughout the album, reminded me a little of Aleena Gibson from Kaipa. There are some wonderful little piano and keyboard runs in the background and the melodies continue to swap places. Around the 6:00 minute mark, there is an upward shift in pace and the keyboards power the track along before providing a springboard for the return of a different, more forceful vocal from Tracy. Keyboard flourishes continue throughout this passage, driving the track, and at 8:15 minutes there is another slight change in emphasis before a return to the motif present around 6:00 minutes. The shift to the third part of the suite follows an extended instrumental passage and another change of pace. At around 11:30 minutes, there is a superb passage of keyboard washes interspersed with choral voices and a little “saw toothed” guitar before keyboards player Mike gets the chance to be in the spotlight on this epic track. Uwe’s guitar has a soaring passage and the interplay with the keyboards from about 13:30 minutes is a fitting finale to this stunning track. The band is in full flight for the last part, giving Tracy a rest from vocals, as they take the track out.

All in all, this is a majestic album, which uses the skills of the 5 musicians involved to create the superb sounds. Although there are flourishes of guitar, keyboards etc, the main weapon in the armory of the band has to be the stunning melodies that they achieve within each track. There are hints towards some of the “classic” prog bands but this is a very unique sound, the sound of Landmarq.  Another of the special edition “One To Buy” stickers adorns the front of this album, which will probably mean that I will have to order more stickers. There are so many amazing prog releases happening and we are only into April.