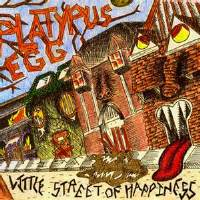 Street Of Happiness is a chaotic circus of music. The band uses an array of instruments such as the flute, tambourine, and English concertina in these songs to help bring this circus to life. Although, it may not to appeal to everyone, this album is good and contains some talented musicians.

The opening track, “Lemonade,” which actually seems to be about lemonade, contains vocals by both Michelle Louden and Kris Calabio. The song contains an excellent guitar solo toward the end. The song has an appealing sound, in that there is no steady structure throughout the song. This leaves the listener on the edge of their seat, never knowing what to expect next.

The very bright and happy “Wonderful Day” is just a fun song. The song contains some fun features such as the random babbling sounds made by the band, or the background singers exclaiming “alright!” or “hey!” to certain lines singer Louden makes. The guitar and drums style of playing make for an up tempo feeling that helps give the song its happiness.

Platypus Egg is an excellent band that doesn’t mind exploring different genres. The combination of a unique style and talented musicians makes for an incredible band that is sure to make a name for themselves. Little Street Of Happiness is an awesome album, especially considering it is their debut album. This is an album worth checking out; you may not like every song, but you should be able to find something that appeals to you. Little Street Of Happiness has the ability to appeal to a wide variety of listeners.
4/5 Stars

For Questions Or Comments About This Review Send An Email To info@muzikreviews.com