Review: Steven Wilson-The Raven That Refused to Sing (And Other Stories) 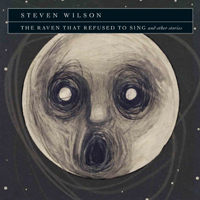 At the ripe age of 45, Steven Wilson is still going strong in his fourth decade making music.  The English musician who is most known his role as founder, lead singer, and lead guitarist for progressive/psychedelic rock band Porcupine Tree, which is currently on hiatus, returns with his third solo effort The Raven That Refused to Sing.  Although it is not a concept album, each song tells its own narrative. Focusing on the gothic and supernatural, the songs deal with relationships, love, loss, death, and murder with accompanying music to set the tragic and ominous atmosphere.

“Luminol” is a grand opening track with its twelve minute run time.  It comes out fast and energetic with a sweet base line that lasts for about four and a half minutes before taking on a slower pace to tell the sad tale of a street performer.  It is the longest song on the album and the least satisfying, as it goes on for too long and could have been condensed without losing anything. It is not a bad song, but the others overshadow it. Thankfully, “Drive Home” is a shorter and better song.  Dealing with the themes of loss and acceptance, the atmosphere is tragic and sad, yet there is a comforting presence in the music. Backed by a great guitar solo, the music is tight and has more direction than the opener.  Next up is the aggressive and manic “The Holy Drinker.”  It tells of a hypocritical, alcoholic preacher who challenges a stranger to a drinking contest, and the stranger just happens to be the Devil. The end part sounds delightfully sinister.

Marking the halfway point of the album, “The Pin Drop” is a macabre tale of a failed relationship. It has reached its breaking point with the husband tossing his dead wife in a river, who sings the song as she drifts away.  Wilson explains that “the idea is that sometimes in a relationship there can be so much tension, so much unspoken resentment and hatred, that the tiniest thing can set off a violent episode, and in this case, one that ends in tragedy. The sound of a pin dropping on a floor can be the thing that instigates the fury.”  The music captures the essence of this broken and wasted relationship, making for a dynamic song.  “The Watchmaker” is a gothic tale of watchmaker and his wife. The loveless union ends with the watchmaker killing her and burying the body beneath the floorboards, but she is not ready to leave him.  It is a twisted tale that seems like a mix of Poe’s “The Tell-Tale Heart” and “The Premature Burial.”  “The Raven That Refused to Sing” is a fitting end, bringing the album’s main themes of relationships, death, and loss together.

The Raven That Refused to Sing (And Other Stories) is a worthy musical accomplishment.  This is one progressive rock album that fans will find much enjoyment in.  The longer songs do tend to go on for a bit, but it does not ruin the overall success of the album. When it is over, The Raven That Refused to Sing makes for a haunting experience with its macabre tales of personal failures, loss, and tragedy.

Key Tracks: Drive Home, The Pin Drop, The Raven That Refused to Sing