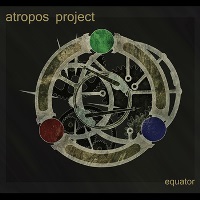 John Quarles, the man behind Atropos Project, wrote, performed, and produced all the tracks on Equator. The album is well done, and it’s hard to believe that it was the creation of one man. Equator has a great sound taking influences from progressive, avant-garde and metal to make a unique but enjoyable album.

The longest track on the album at eight minutes, fifty-five seconds, “Deadfall,” is an epic track. The guitars in this track are great giving the song a metal feeling at times. The drumming is also equally as good and very full of energy. The song has an intense feeling throughout the majority of its length, but sounding mellower at the beginning and ending.

The song “And…Lift” contains an additional musician, Gary Richardi, who provides pedal steel, dobro, and slide guitar which gives the song a slightly southern rock feeling within its progressive rock sounds. Richardi does a great job at the respective instruments he provides. Also there is an excellent guitar solo towards the end of the song that is worth checking out.

Another song with a great guitar solo is “Suspiria.” John Quarles is excellent guitar player; all the instruments he plays are well done. This song shows all his abilities of various instruments, but his guitar playing stands out the most. You can hear the influences of Porcupine Tree and Rush throughout the song.

John Quarles and Atropos Project is a talented musical venture that encompasses progressive rock along with other rock genres. Equator is a great debut album, especially considering the album was written, performed, and produced by one man. Any progressive rock fans will want to check this album out. Also anyone who enjoys great instrumentals or guitar solos will enjoy Equator. John Quarles shows an enormous amount of talent on this debut album, and I look forward to see what he creates in the future.