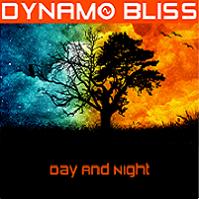 When it comes to making fantastic music, Sweden is where it is at. Some of my favorite bands are from these northern lands and Dynamo Bliss is another quality group to add to that list. Hailing from the university town of Umeå, Dynamo Bliss formed in 2005 and consists of Mikael Sandström (electric and acoustic guitars, banjo, accordion, pedal steel), Stefan Olofsson (vocals, keyboards, zither, guitar, bass, percussion), and Peter Olofsson (drums). They started recording their first album 21st Century Junk in 2008, releasing it in 2010, and signed with Aerodynamic Records at the end of that year. Citing such bands as The Beatles, Pink Floyd, and The Beach Boys as influences, Dynamo Bliss brings a unique blend of pop, pop-rock, progressive, and classic rock to the table. With lyrics on only three of the eleven songs, Dynamo Bliss lets their music do the talking.

Day and Night follows up Popular Music and it is described by the band as “a concept album exploring the events of a not so usual day and night cycle” in case you did not guess from the song titles. This cycle begins with the short “Morning on Mars,” which captures the serenity of the rising sun and the beginning of a new day when there is still dew on the grass. “The Day The Empire Fell” provides a look into the unique sound of Dynamo Bliss. It is trippy, spacey, and overall enchanting. “High Noon” is an atmospheric song that brings to mind the empty main streets from Western movies right before a duel as tumbleweeds roll by.

Next up is the lively “Solemn Undulating Wave.” Its sound shows off more of the progressive and classic rock sides of Dynamo Bliss. “Dusk” is a pretty eerie song that captures the mood of the sun going down and the nocturnal creatures coming out as darkness spreading across the land. I could see this one being made of good use in a horror movie. “Circadian Rhythm” is a trippy sounding song with some sweet vocal harmonies. You can definitely hear their classic rock influences here.

“Another Sundown” is a short interlude that embodies the calm and coolness that comes with the end of the day, which provides for a fine transition into the soothing “Evenfall.” The 10-minute epic “Night Storm” steals the show during the second half of the album. I feel like going on an adventure when listening to this song. “The Small Hours” is a quick set-off that sounds like the start of a new day is almost at hand.

Day and Night by Dynamo Bliss is a wonderful achievement. It is the type of album where you do not want to skip a single song, which is a good thing because it keeps the integrity of the album’s concept intact. When it is all said and done, Day and Night has convinced me that Dynamo Bliss is a band to keep an eye on.