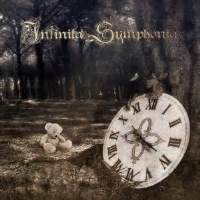 Infinita Symphonia is a symphonic progressive rock band from Italy. Formed in 2008, the band consists of Luca Micioni (vocals), Gianmarco Ricascoli (lead guitar), Alberto De Felice (bass), Juan Pablo Pais (guitar), and Ivan Daniele (drums). In 2009, the band released their first self-produced demo, Into The Symphonia. In 2010, they released their debut studio album, A Mind’s Chronicle, on Scarlett Records. Now with the success of their first album, the band is ready to release their follow-up album, Infinita Symphonia on June 18.
Infinita Symphonia is an exceptional album of progressive rock and heavy metal sounds. The band has followed up from their first album with a release that takes influences from hard rock, heavy metal, and symphonic progressive metal to create a truly great album with a unique feel. Infinita Symphonia also contains guest vocals from Michael Kiske, former lead vocalist for metal Helloween, on the song “Fly.”
“The Last Breath” is a great rock song that deals with the subject of death. Gianmarco Ricascoli’s lead guitar and Ivan Daniele’s drumming give the song a metal feeling while Luca Micioni’s vocals are very melodic, but go well with the metal sounds of the band.
Michael Kiske provides guest lead vocals for “Fly.” His distinctive vocal style makes this track stand out from the rest of the album. Daniele’s drumming is very intense on this track helping to give it a metal sound. Also worth noting is Ricascoli’s guitar playing, which is executed very well.
The much mellower “Waiting For A Day Of Happiness” is a great rock ballad. The song features acoustic guitar that gives the track a more intimate emotional feeling. Micioni’s vocals on this song are very passionate and help to evoke many emotions.
Infinita Symphonia is a great band that brings symphonic progressive rock together with a metal influence. Their second album, Infinita Symphonia, is an incredible album that combines different influences to create a unique listening experience. Metal fans as well as progressive rock fans will want to check out this album. Inifinita Symphonia is a talented band that promises to continue to bring more great music in the future.
4.5/5 Stars
Key Tracks: The Last Breath, Fly, Waiting For A Day Of Happiness
Craig Kidd - MuzikReviews.com Staff
May 25, 2013
©MuzikReviews.com