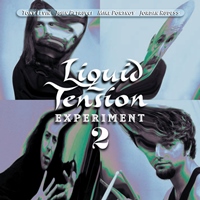 Liquid Tension Experiment was a short lived successful venture by four legendary performers. At the time Tony Levin (Chapman Stick & Bass) was the older veteran musician and the other members were becoming firmly established in another band. As history would unfold the other three would carve their own legendary path to superstardom in Dream Theater. Jordan Rudess (keyboards), John Petrucci (guitar) and Mike Portnoy (drums and percussion) would complete this phenomenal gathering of talent to create two masterpieces of progressive rock, metal and fusion.

Their self-titled maiden release came out in 1998 which I covered on CD and again in 2008 to celebrate the 10 year anniversary with a limited run of colored vinyl (1,000 copies). Their second release simply titled 2 arrived the following year. With Record Store Day on April 20th the label Magna Carta, released a limited run of 1000 copies of the second release on vinyl. This time there were 300 copies of translucent coke bottle green and 700 copies of the translucent electric blue vinyl dispersed worldwide of the two album set. These gorgeous slabs of 180 gram virgin vinyl are stored in gatefold sleeves with never before seen photos and plenty of commentary from all the band members regarding the tracks. Also worthy of note is that each album side brandishes a photo of a band member.

Another point of interest for fans and collectors is the track arrangement, which is broken down differently into 4 sides opposed to the 8 tracks (original sequence) like you will find on the CD. The most extensive track is “When the Water Breaks” clocking in at 16:57, needing all the space of side two to accommodate it.
Perhaps the most interesting and implausible aspect of this music is that it was recorded live off the floor and at some points in the wee hours of the morning. It was a matter of constructing tracks and letting it fly to see what came of the sessions. As fate would have it the recordings are superb and each one features something different whether it be straight ahead rockin’ prog metal or a slice of rock-jazz-fusion with dabs of classical interspersed. This band of four amazing musicians made history with some ambitious music now forever etched in the annals of time.

From the bone crunching riffs of “Acid Rain” to the gentle beauty of “Hour Glass,” LTE was able to touch upon so many different genres and moods it defied logic for this type of session work even if it was freeform in the approach. My personal favorite is the opener on side four “Another Dimension,” which brings to mind the thought of these musicians seemingly originating from somewhere beyond a mere mortals understanding of a normal existence. The track rocks and rolls along at a tremendous pace. Petrucci’s guitar cuts away a path like a freshly sharpened blade and the Rudess keyboards are the driving force behind those pinpoint licks, then to complete this onslaught of audio ecstasy, the locomotive force behind it all is the rhythm section of Portnoy and Levin (a match made in heaven). Another aspect of this ever changing track is how it can knock your socks off with sheer power and force then lull you into a relaxed state with a passage of acoustic guitar painting a soundscape of everlasting beauty. It never lets you down too easy or for any length of time and it always comes roaring back at you like a tidal wave of sound to keep you on your toes. I have always loved the way the track ends with Portnoy hollering at the end “Yeah Baby! Yeah!” - what a great way to wind up the best track on the album. The entire album ebbs and flows just like this track, providing an endless array of twists and turns that keep your ears glued to the speakers at all times.

The same thing that attracted me to this music when it was first released still holds true to this day. This is original, exciting, progressive and above all, timeless music. It will always have the ability to take you to a different realm, just give it a spin on your turntable, listen to the CDs or you iTunes and the effect is similar. One thing to keep in mind though is the sound that vinyl can provide if you have a good stereo system. This is not compressed, it is full bodied and succinct without flaws, just like a perfect cup of coffee, which is of course liquid tension if you drink it with caffeine. Grab your copy and fill your cup with music beyond compare before they disappear!