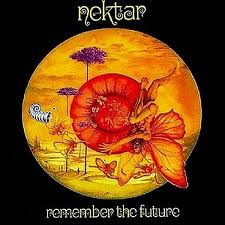 It seems like only yesterday I was reviewing Nektar with a re-mastered and re-issued album Journey To The Centre Of Your Eye, a 2 CD set with the original release plus a bonus disc. Fast forward a little and this reviewer is now looking at Remember The Future,(40th Anniversary issue) another 2 CD re-issue again with the original release plus a bonus disc. Nektar, as I commented before, have had their entire back catalogue re-mastered and re-issued on more than one occasion, and the big question here is, “Does album number 4 from 1973 by Nektar, Remember The Future, merit another appearance on CD?” If you continue on through the rest of the review, all will be revealed.

A reminder at this time about the background of Nektar, a band many people thought of as being of German origin. Nektar were in fact only one of a large number of British bands who made their base in Germany, and although their music was originally labeled as Krautrock, due to the sound, which had the tell-tale swirling keyboards and mellotrons, plus the characteristic fuzz laden guitars, they had their roots firmly planted in psychedelic rock.

The first part of the Remember The Future concept album (16:41) is a rollercoaster of thematic twists and turns as the band almost seamlessly merge their hard rock edge into superb psychedelic/progressive rock. Roye Albrighton must be one of the most under-rated guitarists to have graced vinyl (and now CD), veering from the realms of Hendrix and into those of Gilmour but all the while retaining a uniqueness.  Although there are a few moments throughout the 16 plus minutes when the music seems to be careening into free form land when Roye (guitar) and Allan (keyboards) are to the fore and “going for it,” I think that the two musicians here, have the ability to approach free form areas but who are always aware of what is happening, and when, so well is the music structured. “Part 1” of the concept ebbs and flows between the hard driving rhythmical riffs to an almost ethereal gentleness with ease and a fine example of a superb piece of musical imagination translated into practice.

“Let It Grow” (3:52), track two on the bonus disc is part of the trio of radio edits included, and is a simply stunning jangly guitar led track with the rest of the band sounding like a well-honed power unit. Roye is given the chance to shine on both guitars and vocals, and certainly wastes neither opportunity. A much more unusual song to appear on a Nektar album, must be my third choice, “Sealed With A Kiss” (3:56), which works, I think, simply because of its quirkiness. Swinging from heavily riffing guitars into an almost “Beatlesque” passage before moving into a superb guitar led rock blast prior to returning to the gentler tones of the starting theme. This cover version is over in under 4 minutes but is amazingly memorable.

To come back to the earlier posed question about the merits of another Nektar re-issue, it can appear to be overkill to the nth degree, but some music deserves to be put in front of people after several years of unavailability, and this is the case with Nektar. If you have been a Nektar fan from the start, you will have this material, and the bonus disc isn’t much of an additional incentive to purchase as the music has been previously available, or you might buy it to replace older worn or damaged items. For someone just coming across this era (late 60’s early 70’s) then this is an excellent album to get hold of. Not quite a perfect record however so no special sticker for the front, but Nektar have certainly tried hard.

Key Tracks: Remember The Future Pt 1, Let It Grow, Sealed With A Kiss