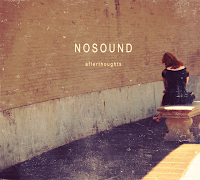 Nosound is an Italian neo-prog band that has previously released 3 studio albums, Sol29 (2005), LightDark (2008) and A Sense Of Loss (2009), thus making Afterthoughts (released 21st May) studio album number four. After several reviews for artists that I was relatively unaware of, I can safely say that Nosound is a superb band and have featured on my radio show in the past. Having said that, does album number four, Afterthoughts, live up to the standard that I, and many others, have come to expect?

Afterthoughts is a 9 track album which has a total running time of around 51 minutes with track 4, “The Anger Song” being the shortest track at 4:19 minutes and the penultimate track, “Paralysed,” the longest at just over 8 minutes in length (8:08).

The music of Nosound is certainly in an area of its own although it does have tendrils that reach out into many different styles, including ethereal, flowing, spacey (a la Pink Floyd), progressive, ambient, cinematic and even touching on the psychedelic. This new album, Afterthoughts, conjures up magnificent, almost sparse, soundscapes which build from a subdued start into walls of sound before receding back into sparseness again. So without continuing to tease the reader, what did this reviewer make of the new album?

The highlights from the album after several listens to the album are, “In My Fears,” “Two Monkeys” and “Encounter,” although it was indeed a very hard choice to decide between all the tracks.

The opening track to Afterthoughts is “In My Fears” (7:56) and sets the scene with a solo electric guitar gently strumming, a somewhat familiar sound on Nosound albums. This is joined by a guitar/keyboard effect that almost “whines” away around the strumming guitar before the drum and bass feature just before the emotive vocals of Giancarlo weave their way into the track. This gentle, almost ethereal, sound continues and then slowly builds with soft piano and then the superb rounded sound of the cello. The drums, bass and guitar continue to intensify, almost overpowering Giancarlo’s vocals and then the track is stripped bare again leaving only the sparse drums and cymbals which are then joined by that superb, haunting piano melody before Giancarlo reappears with the vocals. The track settles back into the initial motif with the instruments again intensifying the sound, and the cello reappears, yet again threatening to completely mask the vocals but they rise over the music. This more intense feel to the track takes the opening track out. A stunning and very atmospheric start to the album, and sets the listener up for a musical voyage through the remaining eight tracks.

Track 3, “Two Monkeys” (5:44) has some superbly played beautiful piano, backed by the softest of bass notes and a guitar which soars over everything else. The drums add to the atmosphere before the vocals, emotion drenched, appear and tell the story of the two monkeys. This track simply drips with emotion, from the instrumentation to the vocals, it is a stunning piece of work, gently changing direction and easing the listener along. Around the 4:30 minute mark there is a terrific passage which takes the track to its finale. It seems to be finished much quicker than its 5:44 minutes, so enveloped do you become in the track that all sense of time simply disappears.

“Encounter” (4:53) enters the fray with a gentle, almost meandering piano passage, soon joined by crisp but unobtrusive drumming and floating guitar chords. The superb cello enters and is soon joined by Giancarlo’s vocals, forming an amazingly atmospheric track. The keyboards form a sort of “surround sound” to the track, wrapping everything else in. This must be the ultimate emotion soundscape on the album, with that melancholic cello so stunningly fusing with the vocals and painting the almost perfect aural experience.

You will gather that this reviewer was well impressed with Afterthoughts, but it does take a few plays before you realize that you are listening to a simply stunning album. I have heard Nosound being described as minimalist but this is far from being correct as the band of musicians move effortlessly between sparseness to walls of sound and back. Set aside the 50 minutes required to hear this album from start to finish and immerse yourself in an experience. I think that it almost goes without saying that this album, Afterthoughts, gets the special “One To Buy” sticker on the front, and indeed also gets a “This Experience Will Last Forever” sticker just below it.

Upload your music for free at ReverbNation.com