Review: Samurai Of Prog-Secrets Of Disguise 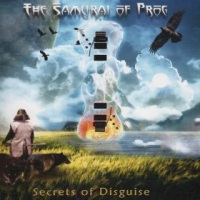 Secrets of Disguise is the second release by the band, Samurai Of  Prog, who have followed up Undercover in 2011, with this release which has taken two years to reach fruition. At the outset, Samurai Of  Prog was a duo, Italian Marco Barnard (bass), who was based in Finland and Kimmo Porsti (drums) from Finland but were then joined by Steve Unruh (vocals, flute, guitar, violin) from America.

As with their initial release, Samurai Of Prog have produced an album, containing mainly covers, but with a helping of self-written material. Cover materials include pieces by Genesis, King Crimson, Yes, and Van Der Graaf Generator, which certainly maintains a huge spread of sub-genres of prog rock from the classic 60/70’s prog
(Genesis/Yes) to the darker recesses of prog (King Crimson/VDGG). The best description to put onto Samurai Of  Prog is that they produce a stunning example of symphonic progressive rock.

Secrets of Disguise comprises a total of 15 tracks spread over 2 discs, with disc 1 clocking in at around 77 minutes and disc two, slightly less, at 54 minutes. The shortest track on disc 1 is “Before The Dance” which runs for 2:51 minutes and the longest is track 1, “Three Piece Suite” which runs on to 12:39 minutes. Disc two has as its shortest track, “Jacob’s Ladder” lasting 7:31 minutes and track 1, “Singring and the Glass Guitar,” the longest at 23:35 minutes.

Picking out highlights has been difficult but “Three Piece Suite,” “Sweet Iphigenia” and “Dancing With the Moonlit Knight” spring to mind.

“Three Piece Suite” (12:39), is the opening track to the album and is a cover of a track from a relatively obscure album released in 1977 by the prog band England, called Garden Shed. Samurai of Prog are joined on this track by an original member of the band, Robert Webb, who brings to the track an amazing array of vintage keyboards. The opening, to a backing of singing birds, is a simple keyboard based passage which the other instruments augment until the voice of Robert Webb appears. The sound is definitely very retro and you start to drift back into the 70’s. Superb keyboards veer in and out between verses and the track flows along beautifully. The track changes again with the addition of the sublime voice of guest vocalist, Mirja Lassila and guest guitarist Akos Bogati-Bokor, who delivers a simply stunning theme over the tight-knit power unit. Another shift in rhythm and the opening themes reappear, with those keyboard motifs ebbing and flowing throughout the track which also seems to build and then drop seamlessly. The track moves along towards its finale allowing more superb piano work by Robert. This is an amazing starting track and a choice of listening to it again or continuing with the album has to be made.

“Sweet Iphigenia” (7:36), is an original piece of music from Kimmo Porsti, Steve Unruh and Linus Kase. It is a piece for an upcoming project, Decameron 2, based on Giovanni Boccaccio’s 14th Century Decameron story. The start of the track certainly makes you imagine a 14th C pastoral piece of music employing soprano sax and bassoon. Even when the voices (Steve and Linus) appear, you could be listening to a medieval round, but there is a distinct shift to “modernize” the sound, both in music and vocals. The track has, at this point, settled firmly into the “comfy” prog zone with that amazing sax continuing the early pastoral theme. The band has settled into a very rhythmical instrumental passage which flows effortlessly. A superb keyboard led passage flows into an electric guitar theme before that sax reappears. All the instruments then fade and what is left is the plaintive theme that started the piece, with that same medieval feel.

The third highlight, “Dancing with the Moonlit Knight” (8:33) is a Genesis cover from the Selling England By The Pound album, which stays true to the original, the only difference being in the vocals, with Steve’s voice replacing that of Peter Gabriel. There are subtle changes in the manner in which the instruments are used and after a slow building start, the track explodes into classic prog rock with swirling keyboards and blazing guitars. The fade out to this stunning track, has keyboards augmented with flute and oboe.

Secrets of Disguise, by Samurai of Prog has its feet set firmly in the symphonic prog area and with its mixture of well known (and lesser known) covers and self-penned material, it has managed to hit that sweet spot, that sought after switch in the mind that makes you reach for the “play again” button. The two years since the release of Undercover has allowed the band (Marco, Kimmo and Steve) to evolve and mature into a superb prog rock outfit. Secrets of Disguise certainly gets one of the special “One To Buy” stickers on the front sleeve and a “The Experience Will Last Forever” sticker on the back.

For Questions Or Comments About This Review Send An Email To info@muzikreviews.com