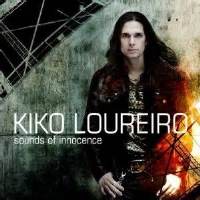 Kiko Loureiro is the guitar virtuoso from Rio de Janeiro, Brazil. At 19, Loureiro joined the metal band, Angra in 1991. In 2005, Loureiro released his first solo album, No Gravity. Loureiro started a project called Neural Code in 2009 with drummer Cuca Teixeira and bassist Thiago Espirito Santo. He has maintained a successful career both with his band and as a solo performer releasing seven studio albums with Angra and three solo albums. Loureiro has now released his forth solo studio album, Sounds Of Innocence.
With his fourth studio album, Loureiro takes influences from jazz, blues, traditional Brazilian music, and mixes it with progressive metal to create an album full of fresh sounds while remaining true to his progressive metal roots. Felipe Andreoli and Virgil Donati provide bass and drums for Sounds Of Innocence.
Within the first few seconds of “Gray Stone Gateway” you can see why Loureiro has been ranked as one of the top guitarists in the world. He provides some amazing guitar solos throughout this song. The solos are performed at incredible speeds, and should really be listened to fully appreciate. Felipe Andreoli and Virgil Donati do a good job at keeping up with this pace to make for a full energy song.
“El Guajiro” has a heavier and metal feeling than some of the other songs. Donati does an excellent job on drums on this song, and Andreoli helps to give this song a truly metal sound with his deep bass playing. Louriero is, of course, excellent on this song, playing amazing techniques that almost boggles the mind to hear. Also of note, this song contains traditional Brazilian rhythm instruments being played that help to keep the song fresh.
The more progressive rock sounding, “Mãe D'Água,” is a great instrumental track that showcases Loureiro’s guitar abilities as well as several other instruments. Loureiro plays slower solos on this track, but still articulates his message very well using jazz influences to create a great rock song. Donati and Andreoli provide great accompaniment to Loureiro’s guitar sounds.
Kiko Loueiro is one of the best guitar players alive, and with Sounds Of Innocence he shows that he will only continue to get better as time goes by. His latest album is a great piece of progressive metal art. Anybody who loves amazing guitar skills should check out Kiko Loueiro. You won’t be disappointed with Sounds Of Innocence.
4/5 Stars
Key Tracks: Gray Stone Gateway, El Guajiro, Mãe D'Água
Craig Kidd - MuzikReviews.com Staff
June 17, 2013
©MuzikReviews.com
By Keith "MuzikMan" Hannaleck at June 17, 2013