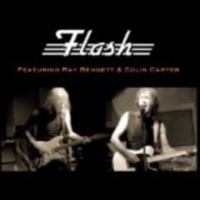 The new review for The Ancient One is the latest release from Flash,   who are an English prog rock band originally formed back in 1971 and who released three critically acclaimed albums in the space of just over a year, namely, Flash (1972), In The Can (1972) and Out Of Our Hands (1973). The original band broke up in 1973 after achieving major success in Europe and The USA.

This new album features original Flash members, Colin Carter (lead vocals) and Ray Bennett (guitar, keyboards, bass and vocals) together with Mark Pardy (drums), Wayne Carver (bass) and Rick Daugherty (keyboards), and has been completed over a period of three years. This album, Featuring Ray Bennett and Colin Carter, is 40 years after the last Flash album so is mainly new material. I was keen to listen to this album to discover whether, after that length of time, the band would be, or even could be, in any way able to reach the previous heights of Flash in the 70’s.

Featuring Ray Bennett and Colin Carter is a nine track album with a total running time of around 58 minutes. The longest track on the album is “Hurt” clocking in at 9:30 minutes (and is a cover of a Nine Inch Nails Song) and track 9, “Richerd Of Venice” is the shortest track at 3:28 minutes.

Thoughts on an initial listen to the album were very positive and if it is possible to produce an album that can sound like a “blast from the past” and also suggest, a freshness, normally associated with young modern bands, then I think Flash have done so.
Highlights from the album, Featuring Ray Bennett and Colin Carter would be, “Night Vision,” “Manhattan Mornings” and “Grand Canyon,” although I would add that none of the nine tracks could be classified as “fillers.”

“Night Vision” (6:30) is the opening track on the album and certainly flies out of the starting blocks. This is a pounding track from the first note, with a flourish of strings/keyboards before the bass and drums kick in to and a superb keyboard passage sweeps the track along with a nice guitar fill over the top .Moving into a more laid back guitar passage, it  then passes into an acoustic guitar section before the voices appear. Colin and Ray share the vocals, before Colin continues, allowing Ray to concentrate on the stunning guitar work in evidence behind the voice. Guitar and keyboards then create an amazingly melodic instrumental passage before the return of the vocals. The keyboard player, Rick, is then given the chance to shine before the track turns full circle to the opening theme with more exquisite guitar work and “strings” taking the track out. This track does what an opening track should do, that is, grab the listener’s attention.

Track 4, “Manhattan Morning” (5:30) is a new version of a track that appears on the third Flash album, Out Of Our Hands, back in 1973. This is a very differently paced track to the previous with a very atmospheric feel to it. There is a marvelous bass passage from Wayne before the more whispery vocals of Colin appear .The superb bass is very evident throughout the song as Colin uses his voice to great effect telling the story. There is huskiness to the vocals which did remind me a little, and I did say a little, of one, Rod Stewart. The more laid back sound to the track complements perfectly the beautifully told story.

“Grand Canyon” (8:18) starts with grandiose “strings” to set the scene before Rays’ guitar picks out an interesting little motif with the powerful rhythm engine of bass and drums driving the track along. More powerful vocals by Colin are backed up by the guitar of Ray soaring above the track and swirling keyboards move in and out. Subtle time changes in the various passages keep the interest of the listener who is rewarded by some superb guitar work and majestic keyboard flourishes. This is another excellent example of a track that can sound both retro and modern as it progresses through it 8+ minutes.

Back in the 70’s, I was aware of the band, Flash, but never really listened to them and have a slight feeling of missing out, having heard this new release. 40 years on from the last release, Featuring Ray Bennett and Colin Carter, sounds fresh and new and gains brownie points every time I listen to it. While not getting the highest accolade I can award, it comes fairly close and it was a hard decision to make. Certainly worth a listen and that will probably be enough to see it appear on many discerning listeners CD shelves.