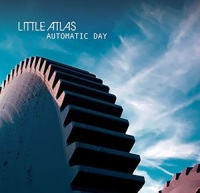 Another of those myriad of bands that had thus far never crossed my musical landscape, arrived recently on my desk. The band go by the name of Little Atlas, hail from Miami, and the current release is album number 4, Automatic Day, which is the follow-up album to the 2007 release, Hollow. This of course means that it has been a fairly lengthy wait for new material from followers of the band.

Automatic Day is a ten track album with a fairly hefty running time of around the 73 minute mark. The shortest track on the album is the final track, “Escape Velocity” at 3:08 minutes, with track 6, “Illusion Of Control,” the longest, at a touch over 10 minute mark. (10:18)

I found this a very satisfying album from the very first listen and subsequent repeat listens have cemented that feeling. I may not have been aware of the band prior to this release, but they are now certainly on my radar sweep when it comes to “new” bands.

Standout tracks, I’m afraid seem to vary from listen to listen, but at the moment. I think I would go for the opening track, “Oort,” track 5, “At The End Of The Day” and track 8, “We All Remember Truth.” My difficulty in choosing is simply due to the range of musical excellence which permeates throughout the whole of Automatic Day.

As regular readers of The Ancient One reviews will be aware, I always put a huge amount of pressure on the opening track of an album, which sets the scene for the rest of the album and so, with that in mind, we approach “Oort” (8:55), the opener on Automatic Day. Superb acoustic guitar from Roy, supplemented by outstanding electrical guitar passages, by the same man, stamp their mark all over this opening track. The subdued bass and drums form the perfect backdrop to the guitars, and when it arrives, the voice of Steve is powerful and clear. Around the 2:20 minute mark there is a stunningly simple but instantly catchy keyboard motif before the song builds up a touch, with the keyboards appearing more behind the vocals. There is a superb keyboard passage around the 3:45 minute point and a terrific change to throaty vocals and acoustic guitar as the track moves past the 6:00 minute mark. Just after this, the heavier guitar and keyboards change the whole feel of the track which then leads into a short almost staccato like passage before that amazing electric guitar from Roy appears again and the heaviness of the track is maintained until the 8 minute point. The vocals reappear again over a terrific bass/drum engine and then there is a short blast of the heavier sound, and it is gone. As an opening track, it does exactly what it should do and grabs the attention of the listener leaving then wanting more.


Track 5, “At The End Of The Day” (8:45) starts with an amalgamation of sounds which lead to an acoustic guitar and keyboard passage with throaty, almost pleading, vocals from Steve There is a change in tempo and sound around the 2 minute mark but then it drops back to the gentle subdued starting passage. There is a repeat change to the more intricate sound at around 3:20 minute point with the keyboards starting to provide a fine passage of play, all underpinned by the excellent bass (Rik )and drums (Mark) before an electric guitar adds a few jagged chords and the sound moves up several notches. The track fades out on a single bass note.

One of the shortest tracks, “We All Remember Truth” (4:18) is a very different style of track to the two above, and initially seemed out of place, but repeated listens has shown it to be an example of another direction that Little Atlas can move into effortlessly. It is a very addictive chunk of prog, drawing influences from many sources, but certainly seems to “tip its hat” to the general sound that Porcupine Tree, at their best, can produce.

All in all, this album is very refreshing, simply due to its ability to “move its feet” into many different sub-genres of prog. At points, there is a hint of Dream Theater, then Porcupine Tree and ultimately, bands like IQ and Pendragon, but, as with all really good bands, the end result is uniquely Little Atlas. All the band members show their skills throughout the album, Automatic Day, and I made the point at the review start about the time between Hollow (2007) and this release, but it was a wait that was well worth it.
A millimeter or two off gaining the maximum a review can achieve, but an amazing album that will certainly please followers and probably gain the band many new admirers.

4.5/5 STARS
Key Tracks: Oort, At The End Of The Day, We All Remember Truth
Jim “The Ancient One” Lawson-MuzikReviews.com Staff
June 25, 2013
©MuzikReviews.com