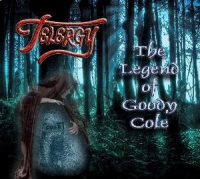 Telergy is a new “band” to The Ancient One, and I use the word band in its widest sense, as Telergy is the brainchild of one man, Robert McClung. Robert is a composer, producer and multi-instrumentalist and started Telergy back in 2009 when his aim was to use the best musicians available across the globe to bring life, musically speaking, to historical events through the use of classical, world, jazz and progressive rock. The debut album, Exodus, was released to critical acclaim in 2011 and a further two years down the line; we have album number two, The Legend Of Goody Cole.
Robert plays an amazing array of instruments including guitar, bass, violin, viola, mandolin, ukulele, lap steel, piano, organs, keyboards, flute, balalaika, bodhran and percussion. His guests, include, Colin Edwin (Porcupine Tree), Ryo Okumoto (Spocks Beard), Nik Turner (Hawkwind), Joel Hoekstraand, and Valerie Vigoda (Trans Siberian Orchestra) to name only a few present on the album.
The Legend of Goody Cole tells the story of a woman (Eunice “Goody” Cole) who was convicted of witchcraft, imprisoned, had her land confiscated, and upon her release and subsequent death, was buried in an unmarked grave. Her ghost then reportedly wandered the town at night looking for her gravestone. What a superb storyline for a concept album and the big question is whether the music can do justice to this terrific story.
The album, The Legend of Goody Cole, comprises 16 tracks and runs close to the hour mark in length. Half of these tracks are scene setters and tend to be very short pieces (7 of the 8 are under a minute in length) designed to carry the storyline across the album and to link the main musical themes. Of the main musical themes, track 14, “Ghosts,” is the longest at 10:26 minutes and track 10, “Incarceration,” is the shortest at only 2:36 minutes.
Choosing highlights from a concept album is difficult since the album as a whole is literally one big track and should be listened to in its entirety. Despite the difficulty, I would go for the following 3 tracks as highlights, “Verdict,” “Ghosts” and “Exoneration.”
Track 8, “Verdict” (3:04) has a real wall of sound starting point with thundering bass and drums, which blast along until, over the top, comes a superb bit of guitar showmanship prior to a choral chant of “Guilty” repeated a few times. A stunning keyboard led passage carries the track on and the track builds with the powerful rhythm unit to the fore. There then appears a magnificent violin passage which simply rides roughshod over everything, and before the chants of “Guilty” return to take the track out, there are some distant horns heard.
“Ghost” (10:26) starts with strings and ethereal voices to set the scene before the voice of Goody explains why she walks the town and the music is provided by a superb combination of piano and flute. This paints an amazingly atmospheric picture as the flautist is given center stage before the drums become more insistent and as the track builds, there are stunning choral effects. A guitar starts to pick out a stunning metal theme to a backdrop of strings and gothic chanting. At this point, however, there is a little dip into the stereotyped progressive metal area with the metronomic drum thrashing, which I found a little distracting. As the track progresses to the finale, metal guitar riffs abound, the chanting reappears and the guitar then literally “takes wing” and flies over everything before a chilling statement from Goody takes the track out.
The final track on the album, “Exoneration” (4:50) is a supremely melancholic piece, with plucked acoustic guitar and a somber, sonorous cello carving out a melody. This encompasses the finalization of the story with Goody being appeased. The track is a beautiful haunting piece of work, and a fitting end to The Legend Of Goody Cole.
Overall, I am still not too sure if this album works in the way it should. It has all the proper ingredients, a great storyline and, at times, superbly written music to complement the story. Unfortunately, although the short linking tracks (“Scene 1”, “Scene 2” etc.) do carry the storyline, I don’t feel some of the instrumental tracks have enough going on to continue to carry the story. A case in point is that although some of the main chunks of music which are meant to convey the continuous story about Goody do work in some passages, there are too many times the music has more than one foot in the progressive metal camp with heavy riffing guitars and metronomic drumming.
Certainly well worth a listen, and a huge undertaking by Robert McClung to bring everything together, but it falls a bit short of an essential purchase, at least for this reviewer.