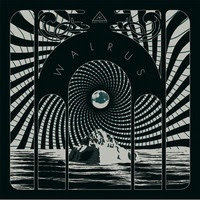 This latest album for The Ancient One to review has one foot firmly in the past and the other in the present which means that the music has to span a few decades. The band is called Walrus and the album is self-titled, Walrus. Walrus is another of those bands that seems to have crept up slowly on this reviewer and then suddenly jumped out and yelled “Hey! We are Walrus!”

The band is a five piece outfit comprising Mattias Olsson (drums), Henrik Olsson (drums), Matti Bye (Hammond and Farfisa organs, mellotron and Wurlitzer), Leo Svensson (cello, mini moog) and Kristian Holmgren (electric bass, fuzz bass). Mattias is from Anglagard, Henrik and Leo are from Gul 3, Matti is a renowned composer of film music and Kristian is a producer/composer. One very interesting thing about the band is the two drummers, who apparently play a double drum kit, called The Sprawl, from different sides and angles.

The self-titled album, Walrus, is in effect a 4 track EP available in vinyl and CD format, and has a running time of around the 33 minute mark. The final track on the album, “Static” is the shortest track at 3:06 minutes and the penultimate track, “Spitsbergen,” is the longest, running on past the 14 minute mark (14:09).

The opening track to the album, Walrus, is entitled “Tromso III,” which perplexed me a little in that as a debut album it seemed a strange title (i.e. III), but on reflection, I don’t think that this band go for “normal.” Across the 7:15 minute length, “Tromso III” takes the listener to many places with its shifting time changes and constant ebb and flow of instruments. This track is an excellent opener as it sets the scene for the other 3 sections of music to follow. As an instrumental, it also highlights that to create an intense soundscape it need not feature a guitar, which is not listed as an instrument played by any member of the band.

Track 2, “Signals” (8:59) has a lengthy, slow introduction featuring some superb bass, stunning cello work and that double drum-kit maintaining an awesome presence. Magnificent organ work from Matti appears and goes again allowing the slow start theme to return with a few extraneous “sounds” floating around, Around the 5:00 minute point, the drums up the tempo and the organ reappears, taking the track off on a very different journey, with the overall sound threatening to build to towering levels, but then, in a twist, drops away to a very sparse ending as the track winds its way out.

The long track, “Spitsbergen” (14.09), starts with an almost nautical feel to it, and by that, I mean the gentle bass and drums generate an imaginary waterfront scenario which slowly builds allowing the listener to float along on the sparseness of the music. Fuzz bass and the double drummers up the tempo several notches and Leo’s cello can be heard with some deft touches in the background. Once again there is a constantly shifting rhythm to the track, seamlessly going off in various directions only to return to the central point before heading off somewhere else. There is a stunning starkness to the music around the 8:00 minute mark which takes the listener off somewhere, prior to that fabulous fuzz bass making a brief appearance which almost acts as an anchor to keep the listener drifting off too far. With 3:00 minutes to go, the whole emphasis of the track changes and builds up steam as all the band members collectively flex their musical muscles before the tempo drops and the opening theme reappears as a finale.

The short final track, “Static” (3:06) not surprisingly starts with a little bit of static and then into another gentle bass and drum passage. There is an organ playing somewhere off in the distance prior to a simple melody being picked out with a magnificent, somber cello passage alongside the main theme. Static continues to fade in and out without ever being intrusive.

I started the review suggesting that Walrus, the band, seemed to have one foot in the past and the other in the present and this is evident the more you hear Walrus, the album. There is a root of Krautrock somewhere in this band, but they also incorporate psychedelic and progressive rock and seem to be reaching further forward into other areas at times, possibly what seems to be classed as post-rock. Their sound is a constantly shifting soundscape and is certainly worth a listen, but to fully appreciate Walrus, repeated listens would be the order of the day. An excellent debut EP which bodes well for a full length album at some point in the future?