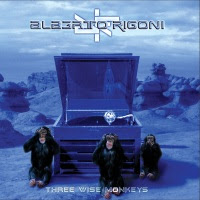 Alberto Rigoni is an Italian composer and bass player, who besides having a solo career, is also a member of Twinspirits, a progressive metal band and founder of a new pop-electro duo, Lady and the Bass. Alberto has released three solo albums, the latest being the one for review, Three Wise Monkeys, following on from Something Different (2008) and Rebirth (2011).

This third solo album, Three Wise Monkeys, by Alberto Rigoni is centered around the Japanese folk legend  of the Three Wise Monkeys and also shows the evolution and maturity that a couple of years can bring to a vibrant, exploring musician.

Three Wise Monkeys, is a 10 track album with a playing time of around 46 minutes, and the opening track, “Toshoga Shrine,” is the shortest at only 1:10 minutes and track 5,” Blackened Tornado,” is the longest at 7:16 minutes.

As highlights for this album, I have gone for the three tracks that bear the names of the Three Wise Monkeys, “Mizaru,” who sees no evil, “Kikarazu,” who hears no evil and “Iwarazu,” who speaks no evil. All of these tracks are instrumental, although the album is about 50/50 with some tracks having excellent vocals from guests.

Track 2, “Mizaru” (6:52), is a very gentle instrumental to start, with a superb bass melody from Alberto, and simple drums, but is quickly into a more aggressive and faster metal passage which goes through several shifts in tempo. Kevin Moore, previously a keyboardist with Dream Theater, supplies stunning keyboards behind the driving bass and the track appears to take on a darker, tense atmosphere. The last minute or so, is simply excellent, again with the bass to the fore, gently taking the track out. The varied tempo of the track, combined with the driving rhythm is easy enough to maintain the interest of the listener.

“Kikarazu” (3:58), track 4, has a soft atmospheric feel with a more jazzy influence and terrific pulsating bass passages. The plucked guitar and bass details throughout this track are superb. This is an amazingly relaxing piece of music and just as the listener is really easing into it, the music finishes, but has been able to press the “memorable” button in the mind.

Track 6, “Iwarazu” (4:23) is a much busier, darker and tense track, with, not surprisingly, the bass taking much of the spotlight. There is another jazzy influenced atmosphere in this track, with layered bass and keyboards which draws the listener in. Just before the 3 minute mark, a very symphonic keyboard passage builds the track up and then the keyboards sweep the track to its finale.

This album, Three Wise Monkeys, is almost split into two separate halves, one with the vocals and the other instrumental, and certainly is a hugely entertaining album. Alberto Rigoni’s phenomenal bass playing ranges from the subtle, delicate tones, shown in tracks such as, “Kikarazu” and “Between Space and Time,” to the out and out aggressive style on “Blackened Tornado” and “Free Falling”. While obviously prominent throughout the album, Alberto does not allow his bass to overpower everything, at times simply providing a solid foundation to allow the guest musicians and vocalist’s room to breathe and shine.

Three Wise Monkeys is an excellent album, striking, as it does, a balance between vocal and instrumental tracks. There are touches of classic rock, progressive metal and even symphonic rock to keep the listener well involved in the music. An album that almost shades a perfect score, but just not quite, although a 4.5 award means that Alberto has delivered a superb album, both for converts and new followers.