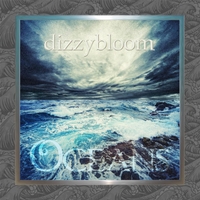 Dizzybloom has been compared to the Sundays and Fleetwood Mac, but their sound is all their own. Their newest full length album, Oceans, has just been released and features the amazing vocals from “Voice” contestant Amy Whitcomb. The album also features Billy R. Preston (guitar, bass, producer), Juliet Gamero (piano), Bogie Bowles (drums) and Steven Oakes (lead guitar). Guest musicians include Courtney Audain (bass) and Wiley Koepp (drums). Some older material with original songwriter and vocalist, Stacey Evans is also included in the mix.
The album is a mix of progressive rock, with elements of a Latin beat, Flamenco guitar and lots of improvisation. You can find a blend of old and new, original pieces and cover songs, but each piece has its own flavor and appeal.
“The first song on the album is “Oceans” and it pops to life with some very lively guitar riffs. Amy Whitcomb’s voice flows over you like a crashing wave bringing life giving sustenance. Gritty, beautiful and infinitely textural, Whitcomb sucks you into the piece, as does the upbeat rhythms. There are elements of hard rock drilling up from the gravel substrate but the flow of this piece is very spiritual.
“Sunflowers” is a song that has stuck in my head from the moment the first notes filtered through the speakers. The ornate patterns of harmony wind around the listener like the winding tendrils of a rose bearing vine. Just be mindful of the thorns. The background music has a tempo that engages the mind and the interludes of music between the vocals drift in and out like clouds. The sweet female vocals hum and seduce with their sweetness and thought provoking lyrics. The piano and vocals entwine together to craft a song that is emotional and a bit of a lament for things that have gone away. The sun brings things back into the light and forces us forward, away from dark thoughts.
“Two Exits” is actually the first song I heard from the album and by far the darkest. That usually means it will be my favorite and of course it is. Deliberate musical paths are drawn and lead the listener along the path less taken, right into the depths of the forest of the night. As I sit here the song slithers down my spine, trailing shivers along my skin and delicious kisses of trepidation as a guitar wails. Lovers of dark fairy tales and Goth sentiments will adore this piece.
Dizzybloom hails from the dry climes of Provo, Utah. Their sound is one that can’t be but into one specific genre. In their new album Oceans you have a blend of their original works, some new and some old, along with a cover of “See Me Feel Me.” To be honest, I liked their original pieces much, much better and was transfixed by works like “Sunflowers,” “Two Exits” and “Edge of the Ending.” They were constructed with texture, fluid rhythms and rapturous vocals that kept my mind wandering back to them over and over again. You know an album has your attention when you start humming the lyrics and melodies when you aren’t listening to it at that moment. Dizzybloom is a refreshing upbeat band that covers some far reaching topics, some pretty deep. Oceans is an album that is fast becoming a favorite in my audible library. I highly recommend it.
4/5 STARS
Key Tracks- Two Exits, Sunflowers, Oceans
Dana Wright-Muzikreviews.com Sr. Staff
July 16, 2013
©Muzikreviews.com