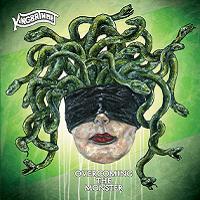 Progressive, alternative, and psychedelic are just some of the few ways that the sound of KingBathmat can be described. Nevertheless, they make it all work to produce their genre bending and, sometimes, defying music. It was what makes listening to Overcoming the Monster such a rich and an enjoyable experience. The band hails from the historic town of Hastings, England and consists of John Bassett (guitar, vocals), David Georgiou (keyboards), Lee Sulsh (bass) and Bernie Smirnoff (drums). The incredible range in their music and the way they fuse different genres make it sound so natural, as if it was always meant to be played this way is a testament to their talent. Their attitude can be summed as “they do what they want” and it has served them quite well so far.

Overcoming the Monster is their seventh album so far and it is nothing short of a masterpiece. The twists and turns are handled with such fluidity that you might as well be gliding through space. But KingBathmat is about more than just stellar music. There is a message behind it all. The monsters in the title are real, though they are not the stuff of fairy tales or bedtime stories. They are the type of monsters that “are manufactured in our thoughts, both internally through our insecurities, externally by the outside influence of others and collectively through the mass media which uses fear as a tool to manipulate our perceptions.” The album is about overcoming these obstacles and rising above them to form a new, clearer perception of reality. Count me in.

On “Sentinel” the power and ferocity of the music is immediately recognizable. It is intense with beautiful intricacies and harmonies, especially where the vocals are concerned. It creates the atmosphere of wandering through a dream landscape in order to discover an inner truth hidden in the subconscious: No one here can understand you! / Feeling down. My senses weak. If the lyrics do not get to you, then the music is enough to burn away the cobwebs in your mind and it is like this for every song on the album. The creepy “Parasomnia” delves deeper into the psyche to a more ancient and primal place. Its unsettling nature might prompt you to listen to this one with the lights on. It is akin to a dark fantasy and the music gets pretty catchy near the end. There are plenty of musical twists and turns on this one.

The opening of “Overcoming the Monster” will suck you right in. Everything feels larger and more open than the previous songs. There is a sense of cosmic boundlessness.“Superfluous” is a heavy hitter with its blend of hard and psychedelic rock, making for one wild ride. Do not let the harmonious vocals fool you or lure you into a sense of security on “Reality Mining” because you will want to pay attention to the lyrics, especially in this increasingly connected world. “Kubrick Moon” is weird, haunting, and wonderful. It brings everything about their unique sound together for a truly mesmerizing finale.

Overcoming the Monster has KingBathmat at the top of their game. Words such as “epic,” “great,” “best” and “amazing” were invented for these types of recordings. It is an experience that will stay with you after long after it is over and will keep you coming back to relive it all over again. If you pass this up, it is hard to take you seriously as a fan not just of the progressive genre, but of music in general.