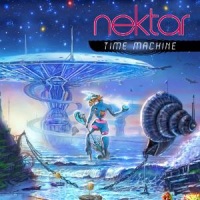 Recently, The Ancient One has reviewed both Journey To The Centre Of The Eye and Remember The Future from Nektar, as both early albums were re-mastered and re-issued, but this album, Time Machine, is a shiny, brand new album. Still present from the original band line-up are Roye Albrighton (guitars) and Ron Howden (drums), who are joined in this current Nektar line-up by Klaus Henatsch (keyboards and vocals) and Lux Vibratus (bass). I am also guessing that the name of the bass player might not actually be his real name? Apparently, during the recording of the album, Billy Sherwood (he does get about, does he not?) was the bass player and Lux joined the band shortly after that point.

An interesting quote about the album that seems to be doing the rounds is that Roye Albrighton claims that Time Machine is the best album Nektar have recorded. Certainly a bold claim, especially considering some of the early Nektar albums, and while not normally a person to disagree with the comments of a band member, in this case, I feel I have to. The reasons for this comment will be revealed as we progress through the review.

Time Machine is a 10 track album with a running time of around 66 minutes. Shortest track on the album is track 8, “Talk To Me,” with a playing time of 3:55 minutes and at 10:14 minutes, the final track, “Diamond Eyes,” is the longest.

Highlights from Time Machine, and there are several to choose from, would be the opening track, “A Better Way,” track 3, “Destiny” and track 5, the title track, “Time Machine.”

“A Better Way” (9:17), is certainly a very interesting album opener, opening as it does with a little bass and some extraneous noises before two spoken voices have a brief chat prior to a fuzz guitar picking out a superb passage with drums and keyboards playing an integral part. When Roye’s vocal enters, you are immediately transported back to classic early Nektar. Around the halfway point, Roye also gets to “let rip” a little with his electric guitar, and at 5:40 minutes, there is a total change of tempo and main instrumentation with a very gentle acoustic passage. The track then slowly builds again with that superb electric guitar work and another of those mysterious spoken passages before the track fades away. A very thoughtful opening track from the band, designed, as an opening track should be, to grab and maintain the attention of the listener.

Track 3, “Destiny” (5:16) is a very different sound, with an almost lush acoustic guitar prevalent and similar styled keyboards to create a very dream like state. There is a superb melodic hook that gets you, without you being aware at the time. The simple harmonized backing vocals sound great, but somehow this is not classic old-style Nektar.

The title track, “Time Machine” (8:06), has an almost gentle feel at the start, with great lyrics, and when the rest of the band join the backing vocals, you feel that you have indeed used a time machine to go back to earlier Nektar. There is an excellent feel to this track, with some superb drumming from Roy Howden, one of the Nektar original members. The track bowls along, from verse to rousing chorus until about the halfway point when an amazing acoustic guitar passage leads majestically into Roye’s superb electric guitar over the rest of the music. At around 5:20 minutes, there is some shining interplay that starts up between the keyboards of Klaus Henatsch and the bass of Billy Sherwood, which changes the feel of the track before a little more of Roye’s guitar takes the track back to the early chorus again as the track exits.

I find the album, Time Machine, a strange mix of the “classic Nektar (progressive and psychedelic), and what I can only describe as melodic pop/rock. To explain what I mean, the opening track, “A Better Way” is a superb Nektar “oldie style” track, but then this is followed by “Set Me Free Amigo,” track 2, which moves several light years away from classic Nektar. It certainly makes for a very interesting album, but getting back to Roye Albrighton’s quote about “best Nektar album ever,” I don’t think he is correct at all. It is a very good album, which tries to tick all the boxes, but it doesn’t quite manage it, and never quite attains the heights reached by the two earlier re-mastered and rereleased albums. My impression is that Nektar are trying out slightly different directions and have yet to decide which one to pursue.

Nevertheless, this is Nektar, a classic prog/psych band and a new album, which is always to be looked for from this type of band by true “olde worlde” proggers. They have definitely evolved through the years, and this album seems to try to satisfy both old and new followers. Time Machine is a hugely enjoyable album and certainly one that merits several plays for the listener to make up their own mind.