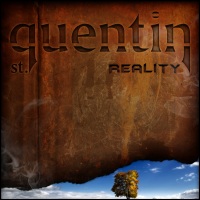 This is another of these times when the album to be reviewed, Reality, is the chance to hear a band that I had not previously heard of, which is one of the perks of being a reviewer. The band in question is St. Quentin, hail from Germany and were formed around 2003. Reality is the debut album by the band and so they have taken a fair bit of time to hone their skills before finally committing their music to cd/vinyl. Their influences seem fairly easy to detect and include bands such as Dream Theater, Metallica, Spock’s Beard and those ageless rockers, Rush.
The band comprises four members, Gerrit Sellmer (lead vocals), Uli Mucke (guitars, keyboards and backing vocals), Volker Paul (bass and backing vocals) and Marco Antonio Lamonaca (drums, backing vocals and samples).
Reality is a seven track album and has a total running time of around 41 minutes, with the opening track, “We Are One” being the longest of the bunch at 9:38 minutes, and track 4, “Something” being the shortest at just over the 3 minute mark (3:01).
My initial impression is that they are firmly rooted in the area of progressive rock that would previously have been labeled as guitar-based hard rock. There is certainly a variety of music on show across the seven tracks on the album and at the moment, I favor, “We Are One,” “Something” and the title track, “Reality.”
As I have often said, the opening track of an album has a very important part to play, and that is to possess something that will hook the listener in quickly and make them eager to hear more. The opener on Reality, is “We Are One” (9.38) and starts with an electro beat and some keyboards before the guitars, bass and drums crash in together with the immensely powerful voice of Gerrit. The track thunders along driven by the pounding bass and drums, but there is the occasional slip into “metronomic drumming,” which I personally find intensely irritating, but thankfully it is short-lived. There are subtle time changes which keep the track interesting and superb guitar work by Uli peppers the track throughout its length. Around the 7.5 minute mark there is an excellent acoustic passage with those powerful vocals by Gerrit building up, followed by the instruments doing the same. Just prior to the ending of the track, there is a female voice away in the background, similar to a newsreader, before there is a little nod back to the electro beat of the intro as the track ends.
The fourth track on the album, Reality, “Something” (3:01), has a gentle acoustic start with the voice of Gerrit again in fine form, backed with a beautiful electric guitar weaving around. There is a slow build-up in the intensity of the track with guitar and more insistent drumming and bass (Marco and Volker) from around the 1:00 minute point and then the track drops back into the more gentle starting passage. Gerrit’s vocals are very clear and powerful at this point with a build-up of sound which almost instantly drops to let the track fade.
The title track of the album, “Reality” (5:14), starts with the superb guitar work from Uli which remains prevalent throughout this track. This is another slow burner of a track with the band forming a tight solid unit behind Gerrit’s vocal. The sound builds gradually and, almost before you know it, you are listening to a very well-formed rock track. The tempo changes from time to time again ensuring the listener is kept interested and then it is gone, almost surprising the listener that 5+ minutes have passed.
A very solid debut album, if a little short after having taken about 5 years to complete, which might be working on the “leave them wanting more” game plan. The influences I mentioned near the start of the review are obvious as you progress through the tracks, but, as with all good bands, they do not simply imitate. St. Quentin have taken the influences and welded them into the St. Quentin sound, including one influence from their own country, that of Helloween, as I certainly detected a little touch of the Helloween sound here and there.
Worth a few listens to let it settle into your mind properly and although not quite an essential purchase, it is always good to be able to compliment a band on a debut album and I await the direction that the band takes from here and look forward to future releases from the band.
4/5 STARS
Key Tracks: We Are One,  Something, Reality
Jim “The Ancient One” Lawson-MuzikReviews.com Staff
July 29, 2013
©MuzikReviews.com