Review: TumbleTown-Done With The Coldness 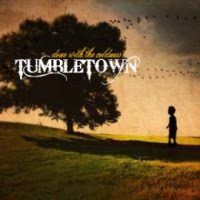 TumbleTown is a studio project put together by two producers, guitarists and composers, who were both in a band called Seven Day Hunt. Han Uil and Aldo Adema, were part of Seven Day Hunt when they released an album entitled File This Dream (2007), which although well received by reviewers couldn’t stop the band from folding in 2008. Aldo wanted to concentrate on studio recording and production work and Han recorded and produced his second solo album in 2010. Both Aldo and Han co-operated on one of the songs and due to that successful partnership, they decided to work together under the name TumbleTown, and so we have the debut album, Done With The Coldness.

June 2012 saw the first TumbleTown video (for the song “One Goal”) being released and this was followed latter in the year by a second video release (for “The End Of Hyde”).
Guest appearances on Done With The Coldness include Eric Laan, from Silhouette on keyboards, Marcel Copini, from Seven Days Hunt on bass and Carola Magermans, also from Seven Days Hunt, on backing vocals.
The information released from the record label, FREIA Music, suggests that TumbleTown brings to the world, via the recording desk, an amazing amalgamation of progressive and mainstream rock, with such diverse influences as Blackfield, Pat Metheny, The Beatles, Spocks Beard, Neil Young, Bowie, Nick Cave and Pink Floyd. That is a huge claim to put on the shoulders of a debut album and the big question to be answered is, “How does Done With The Coldness match up to this claim?” Read on through the review and find the answer to this question.
Done With The Coldness is an 11 track album with a total running time of around 53 minutes, with the final track “Haduwig” the shortest track at a mere 2:11 minutes and track 6, “Finding A Way Out,” the longest track at 7:42 minutes.
Once again, I have had a little difficulty with picking out some tracks as highlights, simply due to the high standard of music spread throughout Done With The Coldness, but I have settled on “The End Of Hyde,” “One Goal” and “I Can Feel You.”
The opening track to Done With The Coldness is “The End Of Hyde” (4:48), beginning with some nice synth/guitar work with subdued drums and bass and the guitar picking out a catchy melody. The initial thought about the vocals when they appear is that they are very Bowie-esque, but sit well within the musical passages. The superb guitar continues to soar over the top of the track, then moves up a notch, but never quite “lets rip” and is kept firmly under control. The vocals have moved away from a Bowie tinged sound to taking on their own persona as the guitar teases the song along and out. This track is a memorable opener which has successfully managed to ease the listener into the TumbleTown sound,
Track 3, “One Goal” (5:28) has already been featured on The Ancient One’s radio show and was one track I latched onto after only one/two plays. A gentle bass, drums, “strings” and vocals start this track, which flows, with ease, into a more powerful passage prior to returning to the quieter, less intense opening passage. The bass playing is particularly fine and the voice has a powerful timbre to it. About halfway through the track, there is more of that exquisite lead guitar work, merging into a short keyboard led passage, and then back to the guitar, this time with a passage that would not be out of place on a Pink Floyd/Gilmour track. The story behind this track is that it is an “out and out” protest song, relating to the situation in Syria, and the lyrics don’t pull any punches. The last minute of the track has the song building up to do to the finale with a very powerful musical message.
“I Can Feel You” (4:00), track 5 on the album, is another gentle starting track, with a simple synth/flute passage and soft vocals, before the drums/bass pick up in the background and the tempo changes just prior to the 2 minute point with the voice nudging up in power. There is another appearance of that guitar work I referred to earlier, before the vocals, and then the guitar is allowed to change the tone of the track and to soar a little bit higher. The track then drops back to the “laid back” starting passage as it fades out.
As a debut album, Done With The Coldness, is extremely promising. There is the odd glitch as you progress through the 11 tracks, so TumbleTown have not “nailed it” with this release. It does make this reviewer very interested, however, to see where they go from this album. Some of the tracks have a “heard this before” bell going off inside my head, but after more plays, I realize that TumbleTown have taken these diverse influences and molded them into a sound which is all their own.
While not a 5 star album, it deserves its 4/5 award and will deservedly attract lots of followers to the TumbleTown sound.
4/5/STARS
Key Tracks: The End Of Hyde, One Goal, I Can Feel You
Jim “The Ancient One” Lawson-MuzikReviews.com Staff
July 3, 2013
©MuzikReviews.com