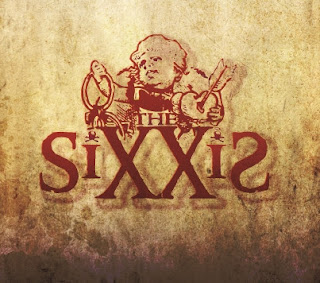 Atlanta, GA – Music fans and critics alike are buzzing with excitement about the news of Atlanta prog ensemble The SixxiS opening for Mike Portnoy's new band The Winery Dogs upcoming European tour in September 2013. The SixxiS are touring in support of their recently released self-titled CD, which has been garnering major attention worldwide! After their first successful tour of Europe as direct support for classic rock legends Wishbone Ash, The SixxiS are gearing up for their second tour, in which they will play 15 shows in 8 different countries spanning Western Europe (England, Netherlands, Germany, Switzerland, Italy, France, Spain and Portugal).

“The SixxiS are amazing musicians whose music has progressive elements with instant melodies. They are proving to be great travel companions and rock hard, as our opener on the dates. They are a great bunch of guys and they are making us appreciate just how lucky we all are to enjoy this life.” - Andy Powell of Wishbone Ash

Says founding member and lead vocalist Vladdy Iskhakov, “The European tour with Wishbone Ash was our first tour overseas. We could not have asked for a better band to be an opener for. They were compete gentlemen, and really helped us through many things we had encountered on the road. We did our best to learn as much as we could from them, because, after all, they have been around for a very long time. I think we formed a great bond and mutual respect for each other, not only as professional musicians, but as people. Their fans were unbelievable! The response we got was amazing!”

What started as a collaboration of different musicians in June 2006 became a powerhouse band consisting of world class musicians. The SixxiS, initially the brainchild of the lead singer, Vladdy Iskhakov, exhibit a wide range of musical influences ranging from classic, jazz and rock music coated in a powerful, heavy, seductive and emotional shell of sound reminiscent of Rush, Muse, Soundgarden, System of a Down, Kings X and Alice In Chains. Due to the musical prowess of the band members, the trio are able to toy with time signatures and syncopation, to grasp the magnetism of robust dynamics, and to focus on the individual mastery of each respective instrument while continuing to be a cohesive whole. The lyrics demand attention from listeners, as they are messages of a soul crying out for spiritual awakening and awareness. The combination of haunting melodies, soaring vocal harmonies, distorted guitars, and a truly 'powerhouse' rhythm section of drums and bass make the SixxiS sound unique and unforgettable!

“The first time I heard the song 'Believe' from the SixxiS I was immediately a fan. Strong hooks, great musicianship and a knack for poetic consonance.” - Edgel Groves Jr. / InsideOut Music

The group's new CD illustrates the overall stripped down sound of the core three-piece group. Says Vladdy, “The music was produced to make us more 'mainstream' than the previous album we recorded, which was much more eclectic. Our sound has always been an enigma to those who listen to our music. Some get it immediately...some think they get it...some don't understand it at all... People generally have a hard time placing our sound...it's not alternative enough to be alternative...it's not progressive enough to be pure progressive rock...it's its own thing. Sure, there are several bands whose influence can be heard in our music, but overall it is independent.” Along with the new studio recordings, the CD and bonus DVD features 3 live tracks taken from the band's performance in August 2012 at the 12th and Porter (venue) in Nashville.

The SixxiS consist of Vladdy Iakhakov (lead vocals, violin, piano, rhythm guitar), Mark Golden (bass, synth), and Josh “Jbake” Baker (drums, percussion, pads, vocals). The band are supplemented when performing live by multi-instrumentalists Paul Sorah and Cameron Allen. “The unity that music offers us is a testament to its power,” Vladdy explains. “Again, coming from different lifestyles, cultures, races and religious affiliations, music is the one thing that helps unify all these experiences together and present them to our listeners as a unique blend. At our live shows, our fans really do get a first hand glimpse of who we are as individuals, and how we blend as a cohesive unit.”

“Imagine Edgar Allen Poe's dark romantic stories and verse set to music – this is the ambiance created by The SixxiS.” - RockOm