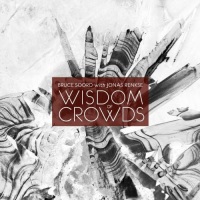 The latest album to land on The Ancient One’s desk is Wisdom Of Crowds by Bruce Soord with Jonas Renkse. Bruce is the Pineapple Thief frontman and Jonas is “the voice” of Katatonia. While being on “nodding acquaintance” terms with Pineapple Thief (in other words I do have a Pineapple Thief CD), I know very little about the band Katatonia, although a little research suggested they were a band in the Doom/Death metal genre formed in 1991. I was therefore eager to hear the fruits of this collaboration between very different genres.

The collaboration came about when Bruce wrote this collection of songs which are slightly “out there” as far as the Pineapple Thief sound goes, and indeed he has stated that the material was written with the voice of Jonas Renkse in mind. It is a very interesting release by two highly respected musicians, with Bruce and Jonas both enjoying considerable success with their respective outfits,Wisdom of Crowds is a nine track album with a total running time of around 53 minutes. The final track, “Flows through You” is the longest at 8:17 minutes and the shortest track on the album is “Radio Star,” track 3, which last for 4:35 minutes. There are many tracks which could be examples of highlights, but I have gone for, the opening track, “Pleasure,” the title track, “Wisdom of Crowds” and the track initially released to promote the album, “Frozen North.”

“Pleasure” (6:11) is the opening track of Wisdom of Crowds and does its “job” very well, by pulling the listener into the music quickly and then refusing to let them go with a range of constantly shifting sounds. A fuzzy/reverbed guitar sets the scene initially before the bass and drums appear and the overall sound drops, apart from some “low end” rumbles, as the voice of Jonas takes over with a very clear powerful delivery. The backing builds up with some excellent guitar work from Bruce and then the vocals are echoed and harmonized in a sort of “call and answer” passage. The intensity of the music grows almost menacingly behind the voice as the chorus is reached and then an amazing piano chord enters behind Jonas. This is a superb part of the track and is then replaced by a stunning guitar passage which maintains the intensity. Another hauntingly beautiful chorus takes us back to the bass, drums, piano and Jonas voice, as the track moves to its ultimate ending with what appears to be a plaintive violin passage.

The title track, “Wisdom of Crowds” (5:03) follows on from “Pleasure” and is a very different entity. If it is possible for a track to sound both dark and emotional and also light and airy, then that is solely due to Bruce Soord and his writing ability. The whole track has an amazing feel to it, with those superb and powerful vocals, soft drumming and subtle guitar passages, and is another of those pieces of music that really “hooks” the listener quickly without apparently trying. Around the 3:30 minute point, there is some guitar work that is just so good, and fits in so well, that when the track ends, you just want to hit the repeat button.

“Frozen North” (6:31) starts with some magnificent acoustic guitar and then some “strings” join in just before those vocals from Jonas slide smoothly into place .The clarity of the voice needs to be stressed as the vocals sit so well in place on this track, as they do throughout the album. At around the 2:30 minute mark, just as the chorus ends, there is a very distinct switch to Pineapple Thief electric guitar style and more of a wall of sound, which is almost menacing, but just as suddenly, we are back in acoustic guitar/voice mode. A further switch to the more severe/menacing sound that is more Pineapple Thief in style takes the track onwards through a passage that veers here and there before settling back a little when the voice appears. From around the 5:00 minute mark, the song drives along towards the finale with the opening acoustic guitar and voice.

This is a hugely enjoyable album and an amazingly successful collaboration with many constantly shifting areas in the music, refusing to allow the listener to think that tracks have a similar feel, such is the diversity of music that Bruce and Jonas have managed to produce. There is no doubting the fact that this album, Wisdom of Crowds, will have a “One to Buy” sticker emblazoned across the front cover and I would suggest that this album has made it into my Top Ten albums of 2013, which is no mean feat considering the huge number of terrific progressive albums released thus far this year. My advice would be to buy this album, set aside enough time to hear it in its entirety and enjoy one of the albums of the year.