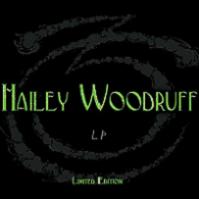 Hailey Woodruff is the definition of a talented musician. Based out of Southern California, she is influenced by a wide range of bands including Pantera, Soilwork, and Tool as well as music from the jazz and classical genres. Her diverse influences can surely be heard as each song has something different to offer. Notably, she does it all on her self-titled album, Hailey Woodruff LP. She backs her stunning voice with her equally impressive skill on the guitar, bass, piano, and drums. I do not know of many one man or woman bands, but Hailey Woodruff has to be hard to top given what is displayed throughout these nine songs.

The talent of Hailey Woodruff is no more on display than it is on the opener. “Solace in a Nightmare” comes out roaring with some blood chilling vocals and roaring guitars, making for one fantastic song. It is the type of first taste that leaves one immediately wanting and craving more. Her voice goes deep under the skin and into the bones, where it stays. Following up the stellar opening, “Cognizance” and “Only One” are two different flavors of dark, with the former having a more melodic edge to it and the latter getting dirtier and gritty, not to mention the mesmerizing guitar action that helps to create a sense of a foreboding atmosphere. The moving “Black & Red” is another one with standout vocals. The music is toned down to give the song an ominous feel to it. Also, the atmosphere is very dreamlike. Continuing from the previous song, “Confession” jolts one back to full attention with some sweet guitar action. The repetition makes it almost hypnotic.

The guitar on “Silenced” steals the show. “Delinquent” is a hard, heavy song that is unrelenting. The drums are crushing and give off an air of brutality. I can most certainly hear the metal influences on this one. I think it is the most memorable song on an album full of them. “Virus” continues the dark and heavy trend. With a touch of sadness behind it, “Floor of Deepest Walls” has a gothic vibe to it. It is dark, yet alluring. The music is not as hard and overbearing as the previous songs. Her vocals are at the front as the music lingers in the background, supporting her beautiful voice.

Hailey Woodruff’s self-titled album is a marvel. Such skill is on display that it is hard to believe at times that is just one person creating this fantastic music. This is easily one of my top albums of 2013 so far, and without question. Every song reveals something new and peels back a layer of her talent. Do not let this one pass by you, because it is truly something to behold. More than memorable, once it is heard, it will be hard to forget the name of Hailey Woodruff.


Learn how to get your song on itunes at ReverbNation.com
By Keith "MuzikMan" Hannaleck at August 18, 2013