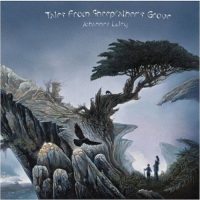 Having now reviewed over 60 albums, there are times when you settle to listen to an album and it literally takes your breath away. I had never heard of Johannes Luley, but a little research told me he was one of the founders of the band, Moth Vellum, who released an album back in 2008, and I was aware of them. He has taken a while to release a solo album, but the wait has certainly been worth it. The album, released earlier this year is called Tales From Sheepfather’s Grove and is a stunning piece of work.

Tales From Sheepfather’s Grove is an album comprising 8 tracks with an overall running time of around 43 minutes. The longest track, track 7 , “Atheos Spiritualis” is just under the 10 minute mark, (9:50), and the shortest track, which is track 3, running for 3:17 minutes is called “Moments.”

There have been a few instances in the reviews I have completed where there is genuine difficulty in picking out highlights, simply due to the fact that the entire album is a highlight. I could wax lyrical about each and every track on the album, but I will limit my outpouring to the following three tracks, and they are, “Stab The Sea,” which is the opening track, “Moments,” track 3 and the final track, “Voya,” all three of which have already featured on my radio show.
The opening track, “Stab The Sea” (7:29), just takes hold of you when it starts and you are transported away into a world of your own imagination. This track builds very slowly with simple synthesizer sounds setting the scene, and then a slight increase in the intensity sets in around 1:30 minutes, before seeming to fade slowly away into the distance. At the 2:30 minute mark, there is a superb acoustic guitar motif backed with hand percussion which continues the relaxed feel of the track, before there is some subdued vocalization in the background which is then supplemented by stunning synthesizer riffs. This continues along with the breathy vocals appearing as the whole track merges into a wonderful soundscape. The appearance of some female vocalization changes the overall feel slightly before the music slides back into relax mode and before you are aware of it, the 7+ minutes have ended. This is a superb opening track which sets up the rest of the album perfectly.


“Moments” (3:17) the third track on the album, and the shortest, starts with a harpsichord sounding motif with the clear almost ethereal vocals provided by Johannes. The sound is very reminiscent of Jon Anderson, Yes, Mike Oldfield and even Vangelis, as the song tempo changes but maintains that “hook.” The overall sound makes you smile and your imagination will strain to run wild again. Similarly with the previous track comment, the ending seems to come just too soon.

The final track on the album, Tales From Sheepfather’s Grove, is “Voya” (3:53) and starts in a very melancholic reflective manner with strumming guitars and a synthesizer passage. Gentle percussion moves the track along before the voice of Johannes comes in with relaxed vocals, which dovetail perfectly with the mood of the music. What has been used very sparingly, and to great effect in places throughout the album, is the electric guitar of Johannes, but in this track around the 1:40 minute point, he lets the guitar take wings and soar. This certainly allows your imagination to shift up a gear again, before the superb vocals return and the track runs its course.

Johannes has taken a bold step by moving away from a conventional drum kit, replacing that type of percussion with all sorts of hand percussion instruments which gives the music more of a feeling. What he successfully does is to weave together all the instruments to produce an amazing aural sensation which allows the listener to simply “go with the flow.” Although I would class this as progressive rock, and that label of course, has so many meanings in 2013, there is no denying that Johannes has made full use of   classical, ambient, world and folk genres to produce a very powerful sound. Once the album was finished, I immediately restarted it and listened to the whole experience again.

I mentioned the sort of influences that seem to come through as you progress through the album, namely the more ethereal sounds of Yes, Jon Anderson, Vangelis and Mike Oldfield, but at no point do you feel you have heard this before. All artists can imitate, but the real skill lies in taking influences and molding them into something unique and Johannes Luley has done exactly that with Tales From Sheepfather’s Grove.

Tales From Sheepfarmer’s Grove certainly gets a “One to Buy” sticker prominently on the front of the cover and also, down on the left hand side of the cover, a “The Experience Will Last Forever” strip. My advice is to buy the album, settle down in a comfortable chair, fire the system up and let your mind get some exercise.
5/5 STARS
Key Tracks: Stab The Sea, Moments, Voya
Jim “The Ancient One” Lawson-MuzikReviews.com Staff
August 7, 2013