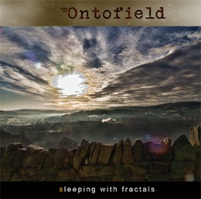 Back in early January I received a single track from a band that was new to me, called Ontofield, to play on my radio show. This track, “Moon Handed,” was superb and the information that an album would be forthcoming was something that made me eager to hear much more of Ontofield. The album, Sleeping with Fractals, arrived about six weeks ago and it certainly did not disappoint, if anything, the music surpassed anything that I had been expecting.

Ontofield is in fact only one man, John Graham, who had the original idea, and wrote, played, programmed and recorded all of Ontofield’s output thus far. Sleeping with Fractals is the stunning debut album by a superbly talented individual, crafting his individual skills through the music and producing an instantly unforgettable experience.

Sleeping with Fractals is a 6 track album with a running time of around 63 minutes. The shortest track, “Moon Handed” opens the album and clocks in at 5:00 minutes, and is a different mix from the single track I had originally heard back in January. Three of the six tracks are in excess of 11 minutes, with the title track running on for 18:02 minutes. The long track times certainly allow John to flex his musical muscles and ideas and you are very aware of the music evolving as the tracks progress.

I often have difficulty with picking tracks to highlight and this 6 track collection is no different, with all the tracks nudging into the superb category. With no disrespect to the other 3 tracks, I would suggest that the title track, “Sleeping with Fractals,” track 3,”Holographic Rain” and track 5, “My Machine” would be ideal entry points into the music of Ontofield.

“Sleeping with Fractals” (18:02), the title track, is an epic piece of music that draws the listener into its complexities and then leads them here and there on a wondrous journey. Starting with a short explosion, there is then a buildup of electronic sound with a very plaintive synth motif above a background of burbling synths which is slowly extended with bass, drums and a simple stunning lead synth passage entering around the 2 minute mark. At the 2:45ish minute point, there is a piano descending passage which literally makes the spine tingle, in the buildup to the vocals. The vocals are very clear and powerful and the lyrics carry a deep message. There is a more menacing guitar/synth passage then takes hold and the organ passage behind the vocals, drives the track along. The organ swoops in and out behind the voice before the guitar gets the chance to shine a little. The regular change from full sound to a more stripped back sound is effortless as the track continues to evolve, and around the 9 minute mark, there is a total drop in sound, with a little brass motif and then a synth passage allows the listeners imagination to go where it will. A stunning synthesizer sequence at about 11 minutes moves the track back up through the gears, allowing John to show his skill on a variety of instruments. A very reflective passage starts around 12 minutes with a simple melody and John’s vocals return with a more relaxed “breathy” feel to them. A buildup of drums/guitar explodes into action at 14 minutes with that superb organ riding shotgun over the top, and the voice assumes more of a hard edge. More stunning guitar work appears around the 15:30 minute point as the track slowly begins to wind its way to the finale.

The third track, “Holographic Rain” (7:08) starts off with a strumming acoustic guitar, joined by organ, bass and drums, and that very clear crisp vocal from John. There is a gentle flowing feel to this track with the piano giving a different accentuation from the synths, which then have a terrific little passage, and then continue to wash in and out of the background. Some superb guitar appears towards the end of the track and then the track moves out with that guitar soaring away.

“My Machine” (11:41) enters with piano and strings and the sound is very different to the other highlighted tracks. References to the Hadron Collider, Dead City Scrolls, Hawkins and Dawkins, petri dishes and microscopes pepper the early lyrics. The tempo is slower at points and this track moves along very serenely with those interesting lyrics. Around 4:30 minutes, another of those stunning guitar passages presents itself and leads into a fuller sound, with the appearance of the organ and the intensity is maintained at a higher point heralding the return of the vocals. The guitar then reappears around the 8 minute point and literally flies and soars above the background taking the track towards its end point, while swooping in and out to great effect.

This album has already featured as “Album of the Night” on the radio show and there is only one track that is yet to be aired. As a debut album, I find Sleeping with Fractals an amazing piece of work and one which definitely gets the “One to Buy” sticker on the front cover, together with “The experience will last forever” sticker in the bottom corner. Releases recently have been superb and this joins a previously reviewed album from a couple of weeks ago in my top 3 of 2013, thus far.

The Ancient Ones advice is to buy a copy of the album, settle down to listen to it while reading the lyrics, and enjoy 60+minutes of superb progressive music.
5/5 STARS
Key Tracks: Moon Handed: Sleeping With Fractals: Holographic Rain
Jim “The Ancient One” Lawson-MuzikReviews.com Staff
August 27, 2013
©MuzikReviews.com