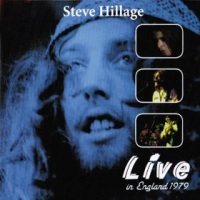 The latest piece of work for The Ancient One to review is something that fans of the guitarist will certainly be glad to see, or should that be, hear? The guitarist in question is Steve Hillage and the latest release is a CD/DVD package entitled Live in England 1979.

I first came across Steve Hillage when he released an album under the name of Uriel (Arzachel 1969) and then again, as Khan (Space Shanty 1972), neither band was around for the long term, and he was soon off to join The Kevin Ayers Band, and then Gong, before becoming a solo artist in 1975. The album under review this week is a rare live album from the Steve Hillage Band, entitled, Live in England 1979, with bonus live material from 1977. The band featuring on Live in England 1979 is Steve Hillage (guitars and vocals,) Miquette Girandy (synthesizers and vocals), John McKenzie (bass and vocals), Andy Anderson (drums) and Dave Stewart (2nd guitar.)
Live in England 1979 is an 8 track album clocking in at around 59 minutes, with the fourth track, “1988 Activator,” the shortest at 2:37 minutes and track 5, “Unidentified (Flying Being)” the longest at 10:07 minutes.
I am always a bit apprehensive upon hearing that the album for review is a live recording, and more so when the date is so far back, but there have been some crackers of live recordings, and the idea that more live material is being made available is also a plus point. Highlights from the album, which I thoroughly enjoyed listening to, would be “Hurdy Gurdy Man,” “1988 Activator” and “Electric Gypsies.”
The original “Hurdy Gurdy Man,” was a huge hit record for Donovan in 1968, and on Live in England 1979, we have the Steve Hillage cover version of the song. This version of “Hurdy Gurdy Man” (7:26) is a little different from the 1968 version and starts with a set of soaring synthesizer washes and a stunning guitar over the top, setting the scene for the track which sees the drums, bass and voice putting in appearances around the 1:15 minute point. The vocals are very clear and follow the original vocal line carefully, but the synths and guitar continue to weave behind the vocal until at just after 3 minutes, Steve lets go with the guitar and lets rip with some excellent playing. This is more of a live jam section which drives the song along and back into a chorus, just prior to the 5 minute mark. The track then moves into a more rhythmical pulse with the synth to the fore, before the guitar of Steve takes off and flies again, taking the track soaring to its finale.
Track 4, “1988 Activator” (2:37) is a straightforward out and out rocker which is very reminiscent of the sound of Hawkwind, but also, I thought, touched on Plastic Bertrand and even The Ramones. A short track which really never stops to draw breath, but blasts along, from the short guitar intro to the driving bass and drums, and odd synth squeaks, then on to the inspired guitar solo midway through and finally, a return to a quick chorus and it is off.
The final track, “Electric Gypsies” (6:23) is noticeably a different quality (as is track 7, “Hurdy Gurdy Glissando”) and is a bonus item, still live, but from a concert two years earlier. There is more of a crispness to the mix but the music on offer follows the superb content of the previous tracks. Synths, guitar, drums and bass generate a terrific start to the track before the vocals come in, with interesting lyrics, and the track motors along, with just enough hooks to keep your attention. Just after the 2 minute mark, my impression is that the musical passage touches on the “tongue in cheek” before merging back into the opening passages. Steve’s guitar is constantly throwing in little riffs until at 4 minutes there is a change in tempo with the rhythm engine maintaining a steady foundation, allowing Miquette on synths and Steve on guitar to step forward and show what they can do, before Steve takes center stage to take the track out.
I did make the point about my apprehension of live albums, but this is one of the exceptions, and is an excellent hour of music. Admittedly the sound is slightly muffled, but not distracting, although to include the earlier live material as bonus tracks, accentuates the difference in the sound quality. Live in England 1979 is a thoroughly enjoyable album, capturing Steve Hillage (and band) delivering a terrific live gig. Followers of Steve Hillage will snatch up copies of this release and I do think that it will add a few more followers to the earlier sound of Steve Hillage.
4.5/5 STARS