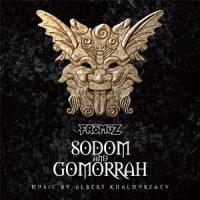 From.UZ is a progressive rock band that hails from Tashkent in Uzbekistan, hence the origin of the name. The band was formed back in 2004 and this current release, Sodom and Gomorrah, is the fourth studio album following Overlook (2008), Seventh Stay (2010) and Quartus Artfactus (2011). Sodom and Gomorrah was composed by multi-instrumentalist Albert Khalmurzaev as the soundtrack for a theatrical production of the same name at the Youth Theatre of Uzbekistan. “The production re-interprets the biblical tale of Sodom and Gomorrah in a modern world, ravaged by addictions and vices that can only be remedied through a change from within the very heart of the human condition” (a quote from the record label).


The band present on this release, contains the 5 original members, Vitaley Popeloff (guitars), Albert Khalmurzaev (keyboards, guitar, harmonica and vocals), Vladimir Badarov  (drums), Andrey Mara-Novik (bass) and Eugeniy Popelov (keyboards and vocals). The album, Sodom and Gomorrah, is a 14 track effort with a total playing time of around 52 minutes. Track 3, “City,” is the shortest with a running time of 2:06 minutes and track 8, “Folly of Mob,” the longest, lasting for 6:45 minutes.

There is a variety of styles in evidence on this release, with some scorching guitar work and burbling keyboards, as shown on “The Capture” but mainly the more atmospheric soaring melodic blend shown on “Prologue” and “The City.” There are even bits here and there that hint at the quirkier side of prog, more in the Gentle Giant style.

The first part of the album I definitely found the more interesting, and upbeat, part of Sodom and Gomorrah, with the second half certainly matching the bleakness of the original story, but losing the tight grip that the first part had on the listener. I do find that concept albums tend to be either amazing, and pull the listener into the story, refusing to let go until the album finishes, or the journey can be a bit haphazard and requires terrific staying power to last out till the end. Sodom and Gomorrah sits firmly astride these two scenarios with the first and second parts to the album, and another obstacle with this particular release from From.UZ is that the album is mainly instrumental, so thereis no narrator to carry the storyline.

Sodom and Gomorrah is, without doubt, a work of intensity and the band members “work their socks off” throughout, but there is no disguising the dichotomy between the first half of the album and the second. Followers of From.UZ will be eager to aurally digest Sodom and Gomorrah, but I do prefer the previous release from 2011, although that blistering first part to the album, hopefully, will be the direction the band move into, and that could make the next release, “the one” that lifts From.UZ several more rungs up the prog ladder