Review: Gandalf's Fist-A Day In The Life Of A Universal Wanderer 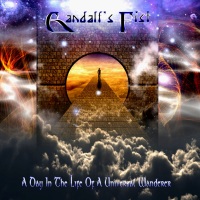 A Day in the Life of a Universal Wanderer is the new album release from Gandalf’s Fist, a duo from the UK, comprising multi-instrumentalist Dean Marsh and lyricist/vocalist, Luke Severn. This is album number 4, following releases in 2010, 2011 and 2012 and is a concept album telling of a “figure who has wandered the cosmos from the birth of existence to the end of time.”

A Day in the Life of a Universal Wanderer is an 11 track album with a running time of around 56 minutes, with the opening track, “Another Night on The Far Side of The Universe” being the shortest on the album at 1:34 minutes, and the final track, “The Wanderer Goes South,” being the longest, clocking in at 8:50 minutes. There are several guest musicians present on the album such as Andy Bolper (sax), Davor Busic and Suzanne Weller (flutes) and a selection of female lead/backing vocalists.

Several of the tracks feature a narrator who has the responsibility of setting scenes and linking passages as the concept unfolds especially the opening track, “Another Night on the Far Side of the Universe.” There are a handful of mainly guitar driven tracks incorporating some stunning flute passages, such as “The Nine Billion Names of God” and “Orphans of the Sky” and more gentle aspects with acoustic guitars and synths, as shown on “Nexus” and “North Of The Wall.” The final track, “The Wanderer Goes South” is the tour de force of the album with rippling guitars, flutes, synths, hooks aplenty and the appearance of one of the guest female vocalists, with a voice both forceful and clear.

After several listens to this album, A Day in the Life of a Universal Wanderer, it still hadn’t hit all the right buttons and I was not really getting into the music/concept. Having left the album alone for a day or two, I settled down to listen again, and it was a case of “welcome back,” as the music must have been gently fermenting away somewhere in my brain and suddenly came the realization that this was a tremendous piece of work.

At times the sound that appears on A Day in the Life of a Universal Wanderer seems to move from the open soundscapes that early Pink Floyd were so good at, through some, admittedly gentle, space rock a la Hawkwind all tied up with the energy of a full flow King Crimson. My one small niggle is aimed at the vocals, which can have a little sameness to them, and I am directing this at the breathy style vocals which seem far down into the mix. The clarity of the guest vocalists and the narrator prevent this niggle from being anything more major.

This is an album that takes a bit of time to get right into, but when that point is reached, you realize that this is an excellent release and worthy of some space on your CD shelf.

Jim “The Ancient One” Lawson-MuzikReviews.com. Staff