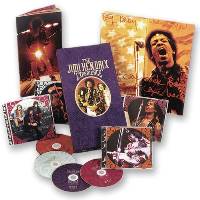 The legacy of Jimi Hendrix continues to grow and gain momentum with a continuous flow of reissues and unreleased material. The “Purple Box” was released in 2000 and it introduced all previously unreleased tracks. It came with a purple felt cover and started the chain of events that unfolded with officially archived Hendrix music that continues today through his remaining family members and Sony Legacy. It also jump started my interest again in his music. I have not listened to the box set in years and this newly released version gave me the perfect opportunity to revisit the music with some additional tracks added. This version does not come with a purple felt cover but it does present some great music and additional gems.

The new edition of The Jimi Hendrix Experience includes all the alternate versions of the classics  you have come to know and love like "Purple Haze," "Foxey Lady," “Bold As Love” and "Little Wing" and some incredibly powerful unheard music such as "It's Too Bad" and "Country Blues," which was on the original 2000 box. The large 80 page color booklet with pictures and information about the tracks is included again as well. Additionally new tracks that were previously unreleased such as a rousing performance of Bob Dylan’s “Like A Rolling Stone” from the October 1968 performances at Winterland in San Francisco and the original recording of “Peace In Mississippi” from the October 1968 sessions at TTG Studios, previously available only as the B-Side of the 2010 “Valleys Of Neptune” single is a great addition to the set.  To sweeten the pie, a recently discovered 1967 performance of “Burning Of The Midnight Lamp” and the original UK single mix of "The Stars That Play With Laughing Sam's Dice," makes its debut appearance on the set.

So is it worth it to drop another 42 bucks for this new edition of the box? That depends on your outlook, if you already have the original box or are simply a Hendrix freak and or are a completest, it is worth consideration. I know this may sound like I should be on psych meds but I qualify as all of the above. Here is my reasoning…if you already have the original box set give it to a loved one that is fan (which I did) and you absolutely need to hear these additional tracks if you are a real music fan or Hendrix nut. It totally works for me and always does.

Hearing all the versions of these Hendrix classics once again shed more new light on the man’s talent. The alternate and live versions are stunning and once again you have the opportunity to explore the sheer talent and virtuosity of this legendary guitar god. It is mind blowing to think that he was either always in the studio with the tape rolling or performing live. That is the reason we have this continuous flow of material being released for the first time, repackaged or re-released. I find it all so enjoyable and always get so excited to hear another release will be coming out because I know there will be something new to hear even if I have already heard the same track a hundred times. Hendrix was the kind of forward thinking artist that had the ability to improvise in such a way that each time you heard him play one of his songs it sounded different. It is his pioneering musical abilities that paved the way for eclectic live modern performers such as The Dave Matthews Band and Phish. If you listen to those groups you will hear his influence and spirit is still alive and well. You will also likely hear them playing one of his songs on a live release or taking a part of a song and folding into one of their own (and what rock act hasn’t done that?). The influence of Hendrix is everywhere and it will continue as long as people are making music. Choosing 3 key tracks in a set like this is off the charts difficult and it would not be a fair assessment of the music so I will go with “ALL” as my choice.

The Jimi Hendrix Experience is solid proof of the worldly influence and his musical genius just as all the other releases that have come out since his passing. Get this box set, you will not be disappointed.