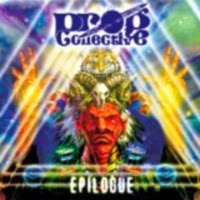 The Prog Collective burst on to the scene with the album of the same name, last year, and now the follow-up release has appeared, Epilogue. The mastermind behind The Prog Collective is Billy Sherwood, who certainly is a very busy musician and pops up in all sorts of places. This album again features a “Who’s Who” of the progressive rock community. I will admit to approaching this release with slight trepidation, having been rather underwhelmed by last years’ debut release.

A glance at the track timings set a little alarm going off in the recesses of my mind, with seven of the tracks falling into the 7-8 minute range, suggesting just enough time for a couple of solo slots from guest musicians, and a little formulaic song structuring. First impressions of Epilogue were mixed, with some tracks sounding fresh and powerful but others moving perilously close to “prog by numbers.”

Epilogue is a nine track album with a total playing time of around 65 minutes. The final track of the album, the title track, “Epilogue”, is the shortest one on the album, running for 2:28 minutes and the penultimate track, “Just Another Day,” is the longest at just over 9 minutes (9:01).

Although there is a myriad of prog “superstars,” this doesn’t guarantee that the overall output will be superb and indeed there is a distinct feeling of an aural landscape of both peaks and troughs.

Tracks which catch the ear include, “Shining Diamonds” (7:53) for Chris Squire’s bass, Steve Steven’s guitar, Patrick Moraz’ keyboards and excellent vocals by Squire, Parsons and Sherwood, and also, “Just  Another Day” (9:01), which is the most complex track on show. This long track soars and dips between classic prog rock, into folk rock and back again, and is a particularly memorable slab of music.

Other tracks seem to be a real mixture of chunks of classic prog interspersed between music that tries hard, but never quite succeeds. “Tomorrow Becomes Today” (7:34), has the memory cells tingling when Sonja Kristina’s voice blasts back through the years, to drag the specter of Curved Air, in all its aural finery,  to the fore, and then simply doesn’t go anywhere, after promising so much. “Epilogue” is a very difficult track to fathom out as the music is heavy symphonic prog but then fails to deliver, and the addition of Mr Shatner’s narration doesn’t help the situation at all.

I approached the album, Epilogue, with a little trepidation, as I stated earlier, and although it is giant steps away from the debut album, I do not think that it reaches the heights that the stunning guest list would suggest it should. An album that I think you should hear, as I may well be doing Epilogue a disservice but there are only occasional fireworks and too many subdued/tired sounding passages.


Key Tracks: Shining Diamonds: Just Another Day: Are We To Believe