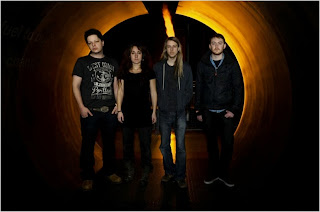 London, UK - Having recently released their debut album ‘Rubidium’ to much critical acclaim, MASCHINE have now launched a video for the track ‘Eyes Pt. 1’ which you can view here: http://youtu.be/VxxSq35KIPw

The album has been receiving some great reviews, with Classic Rock calling them ‘very promising indeed’, Prog Magazine noting that it is ‘an impressive launch for this well-drilled Maschine’, and Classic Rock Society saying it is ‘as good a prog album as you will hear this year’ as well as featuring them on the cover of the latest issue.

The band also recently announced it would be playing a special show in London on the 24th November at the Borderline, alongside labelmates Haken. Tickets can be purchased here: http://www.ticketweb.co.uk/event/YGB0411

The album is available as a limited edition digipak CD with two bonus tracks, and digital download and pre-orders can be found at the InsideOut Shop here: http://www.insideoutshop.de/Item/Maschine_-_Rubidium_-Special_Edition-/15895

Formed in 2008 by guitarist/vocalist Luke Machin at the Brighton Institute Of Modern Music, UK-based prog rockers Maschine are the new young stars on the InsideOut roster. “Young” in this case doesn’t mean inexperienced or amateurish, however, as Machin and bassist Daniel Mash logged in a solid three years as members of The Tangent while preparing to go off on their own with their own brand of music. Now with a fantastic five-piece line-up, the band is ready to make their mark in the progressive world.