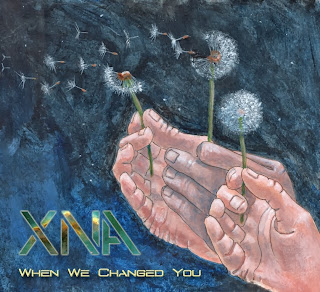 Los Angeles, CA - Following in the musical footsteps of progressive giants such as Yes and Genesis, L.A.-based collective XNA launches their debut recording, the riveting and ambitious concept album When We Changed You, available October 22. Founded by vocalist David Hussey of Genesis tribute band Gabble Ratchet and keyboardist Adam Malin, composer/author of several solo sci-fi rock operas including "Singularity" and co-founder of Creation Entertainment, the company responsible for the original Star Trek Convention, XNA effortlessly traffics in classic prog rock but with a unique, multi-layered, symphonic sound. The evocative lyrics relay strange cinematic stories steeped in history, science fiction, and the macabre. Rounding out the band are drummer Scott Connor of CIRCA: and the Bobby Kimball-fronted Yoso, who provides the rhythmic backbone for the album, and guitarist Danny Bryle of Psychle and Low Media High, who furnishes intricate melodies throughout.

To help bring this epic project to life, the band enlisted a true prog rock mainstay, producer and multi-instrumentalist Billy Sherwood, who also contributes his incredible bass and guitar playing to the recording. Known worldwide for his work with the prog rock institution Yes, and famous for creating lush soundscapes with astounding depth and complexity, Mr. Sherwood possesses production talents that seemed a custom fit for XNA’s sound. Enthuses Sherwood, “The XNA project is amazing in both concept and performance. Each member of the band brings a level of virtuosity that when they join forces it becomes an incredibly dynamic and musically expressive production: orchestral music with power and punch, vocal depth, rock 'n' roll guitars and everything else it takes to make the perfect magical mixture. They asked me on board to produce/mix and it was an instant ‘yes’.”

Earlier this month, Sherwood found himself thrust into an even brighter spotlight thanks to a high-profile, headline-grabbing collaboration with Captain James T. Kirk himself, William Shatner. Shatner also received an early copy of the XNA album When We Changed You and declared it "masterful and wonderful," exhorting the band to "share it with the world." Leonard Nimoy a/k/a Spock likewise offered early praise for the group, "Marvelous -You rock the world!"

Befitting XNA’s commitment to recapturing a more artistic era of music, the album is being released in a sumptuous hardcover digipak and lavish, full color 24-page booklet of lyrics, original paintings and conceptual art.