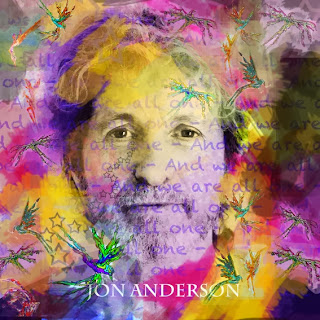 Asheville, NC - Legendary vocalist Jon Anderson, YES's singer/songwriter for 35 years along with his successful work with Vangelis, Kitaro, and Milton Nascimento, will be performing shows in Miami Beach and Clearwater, Florida, as well as Iceland and the Progressive Nation At Sea 2014 cruise. The shows promise to deliver an exciting mixture of material from Jon Anderson's prolific solo career, collaborations with Vangelis and classic YES songs, along with new compositions, highlighted by humorous and enlightening stories told by Jon.

Says Jon, “Performing the classic YES songs I wrote for the band, and Vangelis work is always fun and rewarding... I'll be doing some New song ideas, plus a classic Beatles song, plus a couple of surprises. I just have the best time singing on stage...Hope you find time to come and see the show!”

February 15, 2014 - Jon will be playing a special engagement in Clearwater, Florida with a symphony orchestra! He will be opening for Alan Parsons Project With Symphony Orchestra. The show will be held at Ruth Eckerd Hall in Clearwater.
For more information: http://www.rutheckerdhall.com/
Also, Jon will be touring the US in March 2014. For tour dates and ticket info please visit: http://jonanderson.com/tour.html

February 18-22, 2014 - Jon will be performing on the Progressive Nation At Sea 2014 cruise on the luxurious Norwegian Pearl heading from Miami to Great Stirrup Cay and Freeport, Bahamas. Founded by drummer Mike Portnoy, this music festival at sea gives you an experience that a land festival just can’t match. In addition to 4 days in the beautiful Caribbean and all the amenities of a cruise ship; you will enjoy music from morning ‘til night with over 40 shows on multiple stages, along with activities, Q&A’s, panels and workshops from the participating artists. Along with Jon, who will be performing solo and with Transatlantic, other prog artists scheduled to perform are Portnoy Sheehan Macalpine Sherinian, Adrian Belew's Power Trio, Devin Townsend, King's X, Spock's Beard, The Flower Kings, Anneke Van Giersbergen, Pain Of Salvation, Riverside, Animals As Leaders, The Safety Fire, Tony Harnell & Bumblefoot, Bigelf, Beardfish, The Dear Hunter, Haken, Jolly and Next To None. Forthcoming announcements are scheduled to follow detailing artist-hosted activities, theme night information, contest additions, and activities! For full details and to sign up for the pre-sale, fans should visit:
www.progressivenationatsea.com
Facebook: https://www.facebook.com/progressivenationatsea
twitter: twitter.com/prognationatsea

In other news, Esoteric Recordings in the UK are proud to announce the forthcoming remastered reissues of Jon Anderson's 1994 critically acclaimed album 'Change We Must' and Jon & Vangelis final release from 1991 'Page Of Life'. 'Change We Must' featured extensive orchestral arrangements of both newly written compositions and classic material from Jon's past. This Esoteric Recordings release features two bonus tracks (an interview with Jon and "Change We Must" single edit), and includes an illustrated booklet that fully restores the original album artwork and new liner notes by Jon! 'Change We Must' will be released on October 28, 2013. Jon & Vangelis 'Page Of Life' CD was originally released in 1991 and was the duo's last release. Recorded in Athens and Rome, the album was a wonderful collection of songs and instrumental work, blending perfectly the instrumental genius of Vangelis and the lyrical and vocal majesty of Jon Anderson. The Esoteric Recordings release features a rare and sought after bonus track, "Sing With Your Eyes", released only as part of the highly limited and promotional "Wisdom Chain" CD single in 1991. The CD also includes a booklet that restores the original album artwork. 'Page Of Life' will be released on November 25, 2013.

Lastly, much to the excitement of YES fans around the world, the legendary band has finally been nominated for the 2014 Rock and Roll Hall of Fame! Says Jon, "Wonderful news, all you great Fans deserve to see YES in the Hall of Fame. YES music is very special, very unique, and I'm a fan of what we did as a band, no matter what happens, we still created some of the most wonderful music ever, well I'm blessed to have been part of the Adventure....so excited...have fun!"
To vote for YES to be inducted into the 2014 Rock and Roll Hall of Fame:
http://m.rollingstone.com/music/news/vote-for-the-2014-rock-and-roll-hall-of-fame-inductees-20131016