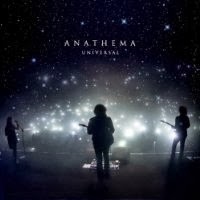 Anathema, the English rock band, evolved from the band Pagan Angel formed in 1990, when they issued their first EP, The Crestfallen, in 1992. The first album, Serenades, followed in 1993 and the last release, prior to the album for review, Universal, was their ninth album called Weather Systems, released in 2012.


This new release, Universal, is a live recording of the opening show of the European leg of their tour following the Weather Systems release. This show was in the ancient Roman theatre of Philippopolis, with the Plovdiv Philharmonic Orchestra and documented by Lasse Hoile, the acclaimed film-maker.

Universal is a 2 disc (CD and DVD) live release containing 12 audio tracks with a total running time of around 79 minutes. “The Storm Before The Calm,” which is track 5, is the longest track with a playing time of 9:12 minutes and “Everything,” which is track 6, being the shortest at 5:35 minutes.

I did notice that of the 12 tracks on Universal, 9 of them come from the two albums prior to this release, and I did have a quick listen to hear the evolution from the early doom laden days to the more atmospheric prog band they have become. The concert allows the band to showcase tracks which highlight the mood and atmosphere that comes across in their studio work, but also to “crank it up a bit” with a full orchestra at their back.

The opening tracks, “Untouchable Pt 1” (6:56) and “Untouchable Pt 2” (5.43), grab the listener from the start, with the sound quality a touch or two above many live recordings. The band are quickly into their routine with clear vocals and crisp guitar work, and throw in some superb harmonies and it is soon possible to forget that this is a live recording. The orchestra certainly lifts the atmospheric stakes and adds a touch of grandeur to the proceedings, before taking “Pt 1” out and gently into “Pt 2”, opening as it does with some simply stunning piano and solo voice. The track continues to build in intensity with the voice of Lee Douglas and the orchestra starts to become more and more integral as the track moves along. An excellent start to this live album, which will ensure that the listener wants to hear more of the music on offer..

Tracks like “Everything (5:36), “Dreaming Light” (5:39) and “Thin Air” (5:51) have gentle starting points which build to a high level of intensity and then gently take their leave. There are countless examples of superb musicianship on display, but the guitar passages on “Flying” (8:10) are truly amazing. A slight aberration, to this reviewer, was the track “Closer” (5:43) which because of the style, just seemed to be out of place on the album.

An excellent album which is certainly worth getting hold of, and settling down to listen to a band which is “Flying” at the moment, and yet again, I have been very impressed with the overall sound quality of this live album. Followers of the band will certainly be happy with this release and it should also serve to garner in a few new listeners to the band.


Key Tracks: The Storm Before The Calm: The Beginning and The End: Flying

©MuzikReviews.com
For Questions Or Comments About This Review Send An Email To info@muzikreviews.com