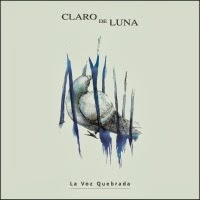 The new album from Claro de Luna, the post/prog rock project by Jose Acuna, is La Voz Quebrada ( The Cracking Voice), and follows on from their debut release in 2011, Lo Que Ha Sido Y Lo Que Sera (What Has Been and What Will Be). This new release is a concept album dealing with everyday communication and the gaps, voids and misunderstandings that can appear with simple errors in communication. La Vox Quebrada is a mainly instrumental album with, according to Jose, only a few “ooohs” and “aaahs.”

Apart from multi-instrumentalist, Jose Acuna, there are some guest musicians on La Voz Quebrada, and they are, Maf Saenz (vocals), Natalia Oddi (flute), Pedro Guttierrez (saxophone) and Tatania Ravazzolli (cello).
La Voz Quebrada is a 7 track album with a total playing time of around 49 minutes, with track 6, “El Mascarero” (The Mask Maker), the longest at 13:20 minutes and the shortest, track 1, “Signato” (Sign) at 2:14 minutes.

I always feel that an opening track to an album needs something to draw the listener into the music and make them want to hear what follows. “Signato” (2:15) has some nice fuzz guitar which then introduces a piano theme over the basic track. There are also a lot of “aaahs” from the guest vocalist, Maf, but it is a very low key start to the album.

“Refraccion” (5:11),” Entre Lineus” (6:35) and “La Otre Verdad” (8:29) follow on from the short opening track and are varied in their structure with some vocalizations reminiscent of Pink Floyd (a la Great Gig In The Sky), excellent guitar passages, flutes and percussion passages. While each track was initially engaging and atmospheric, they all seemed to outstay their welcome and the level of interest was dropping as they ultimately made their exits.

The second part of the album was the more interesting, starting as it did, with the short track, “Desfase” (3:09), which painted an aural soundscape of desolation. This scenario was obtained with a plucked echo guitar and a “faraway” keyboard theme in the distance, and all wrapped up in a short period of time. The long track, “El Mascarero” (13:20) was made up of little sections which flowed into one another and hinted at Mike Oldfield at points, but it did possess that “je ne sais quoi” that made the track memorable.

The title track, “La Voz Quebrada” (9:03), which ends the album is the most successful track as it effortlessly sets another soundscape with simple keyboards and more wonderful vocalizations which literally “hit the nail on the head.” The superb guitar carries this track along and there is a sense of being “inside” the music. The final track, “La Voz Quebrada” encompasses in miniature all that a good instrumental concept album should.

A concept album, especially an instrumental one, needs everything to be firing on all cylinders to shout out “listen to me!” and get the listener immersed in the storyline, carried along on a wave of evocative music. La Voz Quebrada unfortunately comes up a little short in this area, with some individual tracks very good and interesting, but in too many cases, the tracks seem to lack direction and are overlong, losing the listener along the way .This, may of course be a deliberately designed part of the album, bearing in mind the concept is dealing with communication problems?  Good in many areas and with nods towards Pink Floyd, Mike Oldfield and Jon Anderson (Olias of Sunhillow style) La Voz Quebrada is certainly worth  listening to and being only the second album, there are signs suggesting much more still to come from Claro de Luna.