Review: Jonas Lindberg-The Other Side 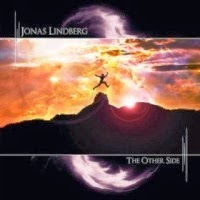 This release, The Other Side, a mini album by Jonas Lindberg is another of those recordings that had not registered on The Ancient One’s radar. Jonas Lindberg is a Swedish bass player and producer who, in 2008 at the School of Music in Pitea, put together a 4 track recording, In Secret Pace, for an exam project. This involved some talented friends and musicians, but didn’t see the light of day until released just last year. When this second album was being planned, Jonas decided that it would be with a 5 piece band and the name came into being, Jonas Lindberg and The Other Side. The music seems to draw influences from many sources, but there are definite “nods” in the direction of Pink Floyd, Sting, Genesis and Level 42 (anyone remember them?) and, nearer to home, I could hear hints of Kaipa, Flower Kings and Moon Safari.

The Other Side is a 5 track mini album which has a total playing time of around 29 minutes, with track 4, *Little Girl,” the shortest at 4:38 minutes and the final track, “Line No 18,” being the longest at 8:23 minutes.

The Other Side starts with “Lies” (5:27) which intros with an excellent piano theme, a little blast of bass and then the voice of Jonas, which is very powerful. The sound picks up with a very solid bass/drums foundation, and the song simply flows along effortlessly. Keyboards and guitar appear here and there and the piano passage from the start reappears, which means that this opening track has it all. There are memorable hooks, a silky smooth melody and it successfully sets the scene for the remainder of this mini album.

The title track, “The Other Side” (5:26) is a little “heavier” but no less melodic and interesting than the opener and “Where to Begin” (5:28) continues the flow of superb music, has excellent harmonies and a stunning guitar passage. The penultimate track, “Little Girl” (4:28) is very different with an intro that reminded me of Star Trek, but it soon turns into a stunningly simple acoustic guitar leading the vocals. This track shows a very different aspect of Jonas Lindberg and The Other Side, gently meandering along with a superb vocal making it a standout track.

The final track, “Line No 18” (8:23) moves off with a blast, showing this band can really rock and even the vocals have a grittier feel. There is no disguising the melodic nature of music on show, as the track simply flows from one section to the next, pulling the listener deeper into the music. Opportunities for guitar breaks, keyboard flourishes and majestic bass lines litter this longer track, giving all the musicians the chance to step into the spotlight.

My initial impression of The Other Side was that it was pleasant, but nothing outstanding, however, what a difference several plays can make to that first impression. I now look upon this release as simply amazing, and it gets both the “One to Buy” sticker as well as the “The Experience will last Forever” one. I wholeheartedly encourage people to get hold of this release and settle down to enjoy half an hour of superb music.