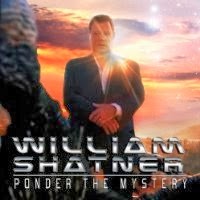 William Shatner, to the majority of people who recognize the name, will always be Captain James T Kirk, but as with many actors, he does have other strings to his bow, and up for review is his latest album release, Ponder the Mystery. This album follows on from Seeking Major Tom, which was critically acclaimed when released in 2011. The material on this album, rather than cover versions, are all originals written by Mr Shatner and his musical partner, Billy Sherwood. (Now I’m sure I have come across that name a few times)


This is one of those albums that has a guest list which contains some superb musicians including Steve Vai, Al Di Meola, Rick Wakeman, Edgar Winter, Edgar Froese and Robbie Krieger, to name but a few. The question however is, do the guest musicians, Billy Sherwood and Mr Shatner nail a good album, or is it a case of, good attempt but a bit more required?

Ponder the Mystery is a 15 track album with a total playing time of around 65 minutes, with track 1, “Red Shift” the shortest at only 1:30 minutes and track 14, “Where Does Time Go” the longest with a running time of 6:40 minutes.

With track 1 being a short introductory instrumental track, “Red Shift,” the second track “Where Its Gone, I Don’t Know” (5:29) becomes the first real track and features Mick Jones (Foreigner). This is a sort of call and answer duet with Mr Shatner reciting his poetry in response to Mick’s singing. The music is guitar driven and is very good, but the structure of this track is an example of what is going to happen again and again. While “Where Its Gone I Don’t Know” is interesting and novel, the style spread over the album will not hold the interest of the listener.

The title track, “Ponder the Mystery” (5:20), is almost a replica of “Where Its Gone,” with the vocal harmonies again pleasant but very similar sounding. There is a slightly different feel to the music, but not enough to “drag” the listener back into the concept.

“Twilight” has a guitar/synth intro into a superb sax theme, and then in comes the poetry and destroys the imagery. “Change” featuring Rick Wakeman sets the scene of an isolated beach with water sounds and synths and is very promising, but again the vocals just distract from the music, and even the superb keyboard work, fails to save this track.

I really did not know what to expect from this album, as my previous knowledge of Mr Shatner’s work suggested “tongue in cheek” success. I feel that the poetry material on offer would be enhanced by an almost pastoral style album and the voice, over an orchestral setting might work very well. The idea of morphing together poetry, progressive music and a concept was interesting, but not particularly successful. The guest musicians turn in good performances, as you would expect, but even they cannot lift the music to the heights it should be reaching.

Overall, a disappointing album, which has left this reviewer to “Ponder the Mystery” of why?

Key Tracks: Where Its Gone I Don’t Know: Ponder the Mystery: Change